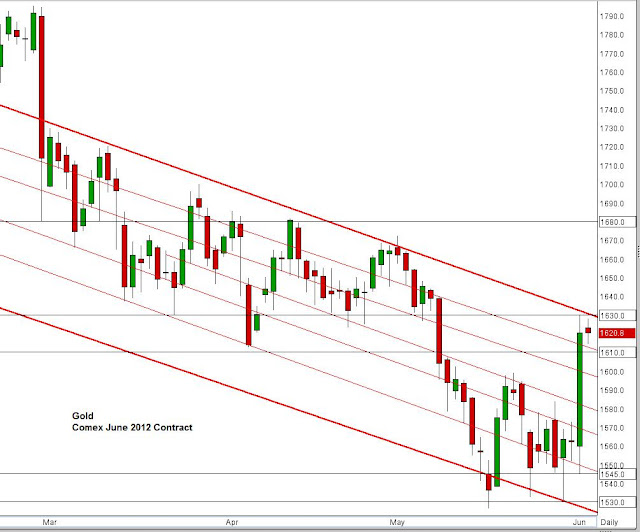 After the spectacular rally of last Friday it is natural for gold to pause and consolidate here.

However, I wanted to make sure you could see the position of the gold price with regard to the intermediate trend.

This is the key resistance which I referred to last week, clearly visible in the chart below.

The hedge funds were leaning very hard on the short side as we had shown in some of the indicators, and as several others had shown in the market structure through the Commitments of Traders Reports. And the bears had ‘gotten smoked’ by the commercials who hit them with a stiff short squeeze last week. As Ted Butler remarked, ‘manipulation goes both ways.’ Yes it does, but not in this case, because Ted does not understand even yet it appears the basic underlying reality of the long term gold market, perhaps because he is so focused on silver.

I think that the downward pressure, or bearish manipulation if you will, was greatly exaggerated by the trading desks because of the key market dates including option expiration. The ferocity of the rally was due to that pressure being relieved and turned back. It perhaps then could be better described as ‘the end to the manipulation’ than an active manipulation itself.

The rounded bottom showed how resolutely the bears had pressed on support, and how equally resolute the market was in holding its ground. If you coil a spring long enough, eventually it may snap back.

Now we see how the physical delivery situation plays out in June and July and if gold can finally break the downtrend. As I said, I do not think that the next leg up may have such an easy time of it because the foundation of the market manipulation is to suppress the gold price for the sake of a macroeconomic policy being put forward by the central banks.

This article was posted in Gold, market, resistance, Uncategorized and tagged gata. Bookmark the permalink. Follow comments with the RSS feed for this post.Comments are closed, but you can leave a trackback: Trackback URL.