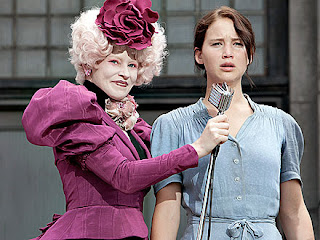 Spokesmodel for the 1 Percent Interviews Our Heroine

“One may safely say that it would be no sin if statesmen learned enough of history to realise that no system, which implies control of society by privilege seekers, has ever ended in any other way than collapse.”

William E. Dodd, US Ambassador, Address to the American Chamber of Commerce in Berlin, 1933

“America’s corporate and political elites now form a regime of their own and they’re privatizing democracy. All the benefits, the tax cuts, policies and rewards, flow in one direction: up.”

If you wish to see a vision of the future of America you may want to read the book that many of your brighter ‘young adults’ are reading, The Hunger Games, in which an almost frivolous, certainly decadent, and highly predatory elite located in the Rocky Mountains (Aspen?) rules the 13 districts of North America through its heavily armed squads ofPeacekeepers.

Poverty and privation is the rule in most of the districts as the economy is largely extractive rather than productive. For whatever reasons, most districts seem rather lightly populated and underdeveloped. I suspect it is a nod to neo-feudalism where efficiency and productivity take a back seat to control.

I started reading the first book because I like to keep a finger on the pulse of what the kids are reading.  It gives us something to talk about, in addition to hearing the names and habits of these fellows in One Direction.

This article was posted in "Chris Hedges", America's Future, collapse, Hunger Games. Bookmark the permalink. Follow comments with the RSS feed for this post.Comments are closed, but you can leave a trackback: Trackback URL.