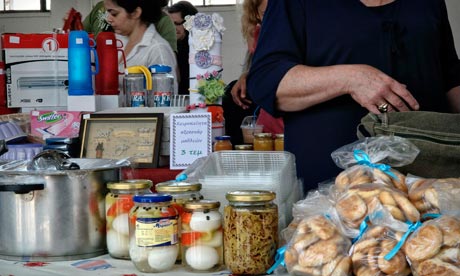 Stall-holders at a bartering market in the central Greek city of Volos, where shoppers use Tem coupons to exchange services or products. Photograph: Despoina Vafeidou /AFP/Getty Images

It’s been a busy day at the market in downtown Volos. Angeliki Ioanitou has sold a decent quantity of olive oil and soap, while her friend Maria has done good business with her fresh pies.

But not a single euro has changed hands – none of the customers on this drizzly Saturday morning has bothered carrying money at all. For many, browsing through the racks of second-hand clothes, electrical appliances and homemade jams, the need to survive means money has been usurped.

“It’s all about exchange and solidarity, helping one another out in these very hard times,” enthused Ioanitou, her hair tucked under a floppy felt cap. “You could say a lot of us have dreams of a utopia without the euro.”

In this bustling port city at the foot of Mount Pelion, in the heart of Greece‘s most fertile plain, locals have come up with a novel way of dealing with austerity – adopting their own alternative currency, known as the Tem. As the country struggles with its worst crisis in modern times, with Greeks losing up to 40% of their disposable income as a result of policies imposed in exchange for international aid, the system has been a huge success. Organisers say some 1,300 people have signed up to the informal bartering network.

For users such as Ioanitou, the currency – a form of community banking monitored exclusively online – is not only an effective antidote to wage cuts and soaring taxes but the “best kind of shopping therapy”. “One Tem is the equivalent of one euro. My oil and soap came to 70 Tem and with that I bought oranges, pies, napkins, cleaning products and Christmas decorations,” said the mother-of-five. “I’ve got 30 Tem left over. For women, who are worst affected by unemployment, and don’t have kafeneia [coffeehouses] to go to like men, it’s like belonging to a hugely supportive association.”

This article was posted in Alternative Currency, Bartering, Euros, Greeks, Tem. Bookmark the permalink. Follow comments with the RSS feed for this post. Both comments and trackbacks are closed.