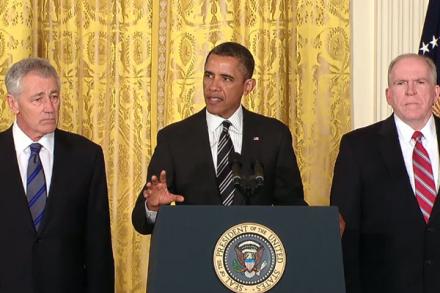 Leadership is a historical relic – a museum piece.   Money leads all.

A conversation with a good colleague of mine triggered my rant.  He had commented that our country is lacking in leadership.  In reference to Obama’s appointments of Chuck Hagel and John Brennan – “I just don’t see much in the way of top leadership…”  Here’s my response:

“Leadership?  What leadership?  They’re just figureheads.  Look at the money behind them?  It’s just incredible to me that most people look at these politicians and they think that they’re the people creating and implementing policy.  They definitively are not.  They are bought and paid for many times over by big corporate interests and wealthy individuals.  The rest is nothing but a dog and pony show.  The human version of the  Westminster Dog Show.

Take a look at the people Obama has appointed for Secretary of Treasury and the SEC.  You think for one second that if most of the people in this country bothered to look into their backgrounds and Wall Street track records and current Wall Street ties that they would vote for those two people if we could vote on appointments?   No way in hell.  Both Jacob Jack Lew and Mary Jo White are completely conflicted and heavily under the influence of Wall Street.

Look at our “wonderful” President.  Go re-listen to his 2008 campaign speeches.  He promised to clean up DC and Wall Street.  Not only has he NOT cleaned those sewage pits up, he’s enabled them to take even more control of lives and our wealth.  How about the first thing he did after he got elected:  he appointed someone as Treasury Secretary who was a pure lap dog for the big banks AND who was caught cheating on his taxes three god damn years in a row.  Are you kidding me?  The guy in charge of tax revenues is a tax cheat and Obama insisted on putting him in office.  So much for cleaning up the system.

This article was posted in Chuck Hagel, collapse, John Brennan, Leadership, obama and tagged Uncategorized. Bookmark the permalink. Follow comments with the RSS feed for this post.Comments are closed, but you can leave a trackback: Trackback URL.