It was nice knowing you, America 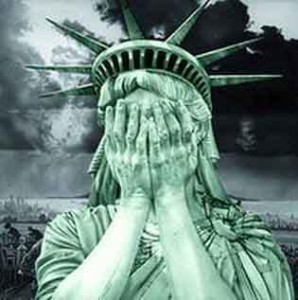 There are now an astonishing 90 million people absent from the US labor force.

NPR reports: “Every month, 14 million Americans get a disability check from the government.”

“In Hale County, Alabama, nearly 1 in 4 working-age adults is on disability.”

As of December 2012, 47 million Americans were on food stamps. The USDA assesses the annual cost of the program at $71.8 billion.

Separate from food stamps, and apparently not including other members of a household where at least one person is receiving government payments, we have 4.3 million Americans on welfare.

Medicaid, the government medical-care program for the poor, lists 50.1 million people enrolled in 2011. If you include Americans who were on Medicaid for at least one month in that year, the number swells to 70.4 million. As a result of Obamacare, the US Dept. of Health and Human Services predicts 20 million new people will be added to Medicaid in 2019.

Forbes Magazine states the annual cost of healthcare in the US is $2 trillion. And yet, concealed from the public, this money is used to wreak incredible destruction on the people.

In 2001, a landmark article in the LA Times, written by Linda Marsa, reported that 100,000 Americans are killed by FDA-approved pharmaceutical drugs every year, and 2.1 million more people are hospitalized as a result of adverse reactions to the medical drugs. In all, there are 22 million significant adverse reactions each year in the US.

This article was posted in America, Disability, labor force, Obamacare, USDA and tagged Uncategorized. Bookmark the permalink. Follow comments with the RSS feed for this post.Comments are closed, but you can leave a trackback: Trackback URL.