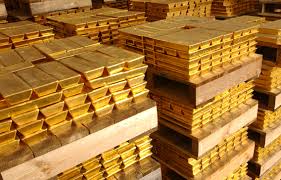 Switzerland is to hold a referendum on a popular measure that would ban the central bank from selling its gold reserves and force it to keep at least 20 per cent of its assets in the metal.

Under the terms of “Save our Swiss Gold”, which is led by members of the ultra-conservative Swiss People’s party, the Swiss National Bank would have to repatriate gold reserves held abroad and keep them at home.

Under Swiss law, initiatives that attract more than 100,000 signatures can be put to a referendum. On Thursday, the federal chancellery confirmed that the campaign had gathered 106,052 legitimate signatures.

Cyprus agreed last week to sell gold worth about €400m from its reserves as part of efforts to bring its public finances into order, sending the gold price tumbling on fears that other eurozone countries with debt problems might follow suit.

Governments in the eurozone’s beleaguered southern periphery tend to hold a large part of their total foreign reserves in gold – the Italian central bank holds 2,451 tonnes, more than 70 per cent of its total reserves, while Portugal’s holding of 383 tonnes accounts for 90 per cent.

This article was posted in "gold reserves", Cyprus, Eurozone, Gold, Switzerland and tagged Uncategorized. Bookmark the permalink. Follow comments with the RSS feed for this post.Comments are closed, but you can leave a trackback: Trackback URL.