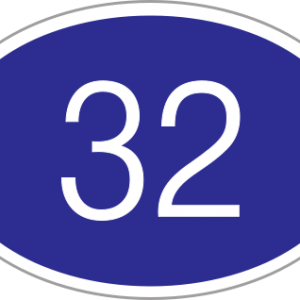 What is wrong with men in America?  Why isn’t our country producing lots of strong, independent, hard working men of character like it once did?  Well, many believe that it starts at a very young age.  When compared with girls, boys in the United States get lower grades, they are much more likely to get into trouble at school and they are much more likely to be put on behavior-modifying drugs.  When it comes time to pursue a higher education, most of our young men are ill-prepared to do that.  Today, nearly 60 percent of the students enrolled at U.S. colleges are women.  And of course it has become much more difficult for men to find good jobs.  In fact, less than 65 percent of all men have a job right now.  Without a good job, a man is not considered to be “marriage material”, but a large percentage of our young men don’t want to get married anyway.  Society has told them that it is okay to be a “slacker”.  Today, far too many of our young men are far more interested in their various addictions (beer, drugs, sex, video games, gambling, etc.) than they are in starting a family.  But the truth is that men are far more happy when they have a purpose.  When men are raising families, starting businesses or doing something to transform society they feel fulfilled.

Our system beats up our boys and young men so badly that only a relatively small percentage of them emerge into adulthood as strong, independent young men that are able to take care of themselves and start families of their own.

Do we have a crisis on our hands?

Yes, we most definitely have a crisis on our hands.

In the 1950s, nearly every man in his prime working years was in the labor force, a category that includes both those who are employed and those actively applying for jobs. The “participation rate” for men ages 25 to 54 stood at 97.7% in early 1956, but drifted downward to a post-war record low of 88.4% at the end of 2012.  (It ticked up very slightly at the start of this year to 88.6%.)

So where have all the men workers gone?

Some went into prison. Others are on disability. And still others can’t find jobs and have simply given up looking. 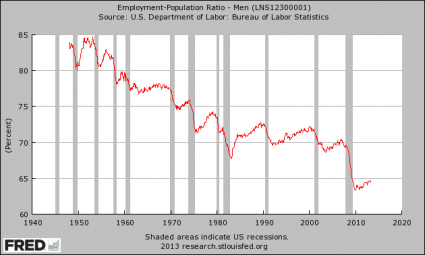 #3 During the last recession, men lost twice as many jobs as women did.

#5 According to the Economic Policy Institute, the “real entry-level hourly wage for men who recently graduated from high school” has declined from $15.64 in 1979 to $11.68 today.

#6 Between 1969 and 2009 the median wages earned by American men between the ages of 30 and 50 dropped by 27 percent after you account for inflation.

#7 Thanks to government policies which are killing off small businesses in America, the percentage of self-employed Americans is at an all-time low today.  This has had a disproportionate impact on men.

#10 More than half of all middle management jobs in America are now held by women.

#11 More than half of all health care jobs in America are now held by women.

#13 Incarceration rates for men in America have been steadily increasing over time.  The following is from a recent CNN article…

#14 According to the Pew Research Center, only 51 percent of all American adults are currently married.  Back in 1960, 72 percent of all adults in the United States were married.

#15 Males account for approximately 70 percent of all Ds and Fs in U.S. public schools.

#16 About two-thirds of all students in “special education programs” are boys.

#18 The average young American will spend 10,000 hours playing video games before the age of 21.

#19 One study discovered that 88 percent of all Americans between the ages of 8 and 18 play video games, and that video game addiction is approximately four times as common among boys as it is among girls.

#21 According to the New York Times, approximately 57 percent of all young people enrolled at U.S. colleges are women.  That means that only 43 percent are men.

#22 It is being projected that women will earn 60 percent of all Bachelor’s degrees from U.S. universities by the year 2016.

#23 Once in college, women are much more likely to complete their education and get a degree…

Women born in 1975 were roughly 17% more likely than their male counterparts to attend college and nearly 23% more likely to complete a four-year degree, according to data in Wayward Sons.

#24 Young men are nearly twice as likely to live with their parents as young women the same age are.

#25 Back in 1950, 78 percent of all households in the United States contained a married couple.  Today, that number has declined to 48 percent.

#26 The marriage rate in the United States has fallen to an all-time low.  Right now it is sitting at a yearly rate of 6.8 marriages per 1000 people.

#29 At this point, approximately one out of every three children in America lives in a home without a father.

#31 An astounding 30 percent of all Internet traffic now goes to pornography websites, and one survey found that 25 percent of all employees that have Internet access visit sex websites while they are at work.

#32 In the United States today, political correctness reigns, and any reference to the male gender is being stamped out of our language.  For example, all over the country the term “manhole” is being replaced with the terms “utility hole” or “maintenance hole”.

So what do you think?

Do you believe that men are being systematically emasculated in America today?