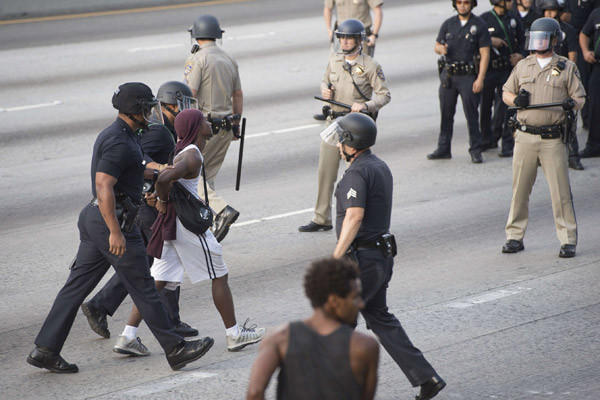 One of the questions to emerge out of last night’s unrest in Oakland, where crowds protesting the George Zimmerman verdict turned violent and seized control of a major street for three hours, is why police withdrew from the area and allowed drivers to be terrorized.

According to a report by ABC 7, protesters had “complete control” of 14th and Broadway near Oakland City Hall and refused to let vehicles pass.

At about 8:30 p.m., police opened the intersection to traffic. But it quickly deteriorated when demonstrators surrounded frightened drivers who found themselves trapped. The crowd forced them to turn around.

Oakland police officers that had been near the corner retreated, leaving the helpless drivers without police protection. It’s unclear who gave that command.

This article was posted in George Zimmerman, Los Angeles, Oakland, protesters and tagged Uncategorized. Bookmark the permalink. Follow comments with the RSS feed for this post.Comments are closed, but you can leave a trackback: Trackback URL.