Are These The Last Days Of The U.S. Marine Corps? 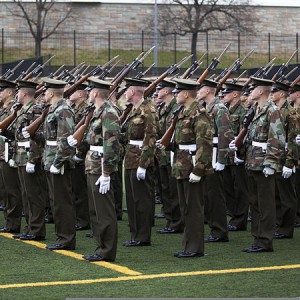 Are the current personnel cuts the beginning of the end for the U.S. Marines?  Could these actually be the last days of the U.S. Marine Corps?  A decade ago, such a notion would have been absolutely unthinkable, but times have changed.  The Marine Corps was already in the process of drawing down from a peak of 202,100 Marines to 182,100, and now Defense Secretary Chuck Hagel is warning that the sequester cuts may force the Army to be cut down to a size of 380,000 and the Marine Corps to be cut down to a size of 150,000.  Unfortunately for the Marines, even larger cuts may eventually be coming.  Many in the Obama administration and in the Pentagon are now openly questioning whether there will be an important role for the Marines to play in the future.  After all, the U.S. military has not conducted a major amphibious landing since the Korean War.  As our politicians look for even more ways to cut military expenses in the years ahead, the Marines may end up being very tempting “low hanging fruit” that the bureaucrats can’t resist.  And unless another major conflict erupts, it seems clear that more cuts are probably coming.  In fact, even the New York Times admits that “deep reductions” to the U.S. military have long been an important goal for Barack Obama.

So does Barack Obama plan to go after the Marines?  Well, for now Barack Obama is publicly praising the Marines.  In fact, Obama made the following promise to the Marines during a recent speech at Camp Pendleton…

“After all you’ve given to our nation, you have to know your nation will always be faithful to you.”

Will Obama keep that promise?

Well, considering his track record perhaps you should not hold your breath.

Amos said he assumes the Corps’ planned shift to more operations in the Pacific will continue, but the size of the force and the number of missions it will be able to undertake will be reduced if the budget cuts stay in place.“We’re going to do less with less,” Amos told the House committee. “That doesn’t mean we’re going to do it poorly or we’re going to do it inadequately. We’ll do it the very best we possibly can.”

Unfortunately for the Marines, they are being given less and less these days.

You see, the cuts to the Marines did not start with the sequester.  The truth is that plans to reduce the size of the Marines started very early in the Obama administration.  For example, the following are recommendations for cuts that came from the 2010 Force Structure Review Group report…

• A 9 percent drop in logistics

• A 7 percent drop in Marines assigned to non-operational billets

• And a 12 percent drop in the civilian work force.

And back in 2010, Defense Secretary Robert Gates stated that the Marines had “gotten too big” and he also publicly questioned the future of the Marines…

“All of the military services have been challenged to find the right balance between preserving what is unique and valuable in their traditions, while at the same time making the changes necessary to win the wars we are in and prepare for the likely future threats in the years and decades to come,” he said. “Looking ahead, I do think it is proper to ask whether large-scale amphibious landings along the lines of Inchon [the Marine’s invasion of the Korea peninsula in 1950] are feasible.”

Of course part of the problem for the Marines is that they are still considered to be a part of the U.S. Navy.  The following is from a recent Fiscal Times article…

The Marines, while considered a separate branch of the military, are actually part of the Navy. They’re often referred to as the “infantry of the Navy.”

“The Marines don’t have a separate fiscal existence. They are a wholly owned subsidiary of the Navy,” Adams said.

When it comes time to cut the Navy budget, it is often the Marines that feel the most pain…

But the Navy has authority over the Marine’s personnel budget–expected to be $12.9 billion in 2014. This means that Navy brass can decide how it pays to train, house, feed and maintain readiness of the troops.

Because of this, according to Adams, the Marines often find themselves the victims of Navy spending fights.

And right now the U.S. military is experiencing a spending squeeze that they have not felt in many, many years.  In addition to personnel cuts, a whole host of other Marine programs could be cut back significantly because of the sequester…

Fewer F-35B Joint Strike Fighters, MV-22 Ospreys, AH-1 Cobras, and UH-1 Hueys. No Marine Personnel Carrier. Maybe no Joint Light Tactical Vehicle to replace the Humvee. 8,000 fewer Marines on active duty. The Marine Commandant has put all that on the table as part of his proposal to the Defense Secretary’s Strategic Choices and Management Review. If sequester goes into effect in its full 10-year, $500 billion glory – and all signs so far are it will – then Marine Corps Commandant Gen. James Amos stands ready to sacrifice almost everything except the Amphibious Combat Vehicle and combat readiness.

As the size of the U.S. Marine Corps gets whittled away, we need to be very careful that we do not lose a very important part of our culture.  The Marines have a very special place in U.S. history, and we should never forget the blood that so many of them shed to defend our liberties and our freedoms.

Unfortunately, our liberties and our freedoms are being eroded at an astounding pace today, and even the Marines themselves are quickly becoming an endangered species.

After surviving the Japanese and the North Koreans, it is a shame that many old vets may have to watch the Marine Corps that they love fall victim to Barack Obama and the bureaucrats.

The few and the proud are rapidly becoming fewer, and it just doesn’t seem right.

This article was posted in Barack Obama, Commentary, marines, Michael T. Snyder, Personnel Cuts, sequester cuts, The Last Days, The Obama Administration, The U.S. Military, U.S. Marine Corps. Bookmark the permalink. Follow comments with the RSS feed for this post.Comments are closed, but you can leave a trackback: Trackback URL.