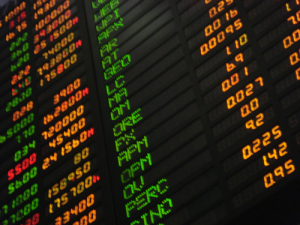 It is often said that a market bubble has reached its peak when everybody wants to get in on the action. When it becomes a fad that attracts the gullible masses who have no business buying into it, then you know that the market is completely saturated, and will likely burst in the near future.

Keep that in mind as you read the following. Apparently stores like Kmart, Office Depot, Safeway, and Toys “R” Us are preparing to sell stocks in their checkout lines, which will be sold like gift cards. Instead of cashing them in for merchandise, you’ll be able to cash these cards in for stocks. The idea was created by patent attorney Avi Lele who wanted to give his nieces and nephews stocks for Christmas, but was frustrated when he had to attain their Social Security numbers first. “It is taking something complicated and expensive and making it accessible to everyone,” he said to the Wall Street Journal.

So far 20 different companies will be available, including heavy hitters likeFACEBOOK

Inc., Coca Cola Co., Apple Inc., and Berkshire Hathaway, and even precious metals like gold and silver (the fake kind of course, who would want real gold?). Mr. Lele is hoping to make his stock cards available in time for the holidays. If this isn’t a shoeshine boy moment, then I don’t know what is.

The post Coming Soon: Buying Stocks At the Grocery Store? appeared first on Silver For The People.

This article was posted in Gold, Market Bubble, Silver, stocks and tagged Uncategorized. Bookmark the permalink. Follow comments with the RSS feed for this post.Comments are closed, but you can leave a trackback: Trackback URL.