18/10/15: Is Ireland a Euro Periphery Outlier? Some Historical Data 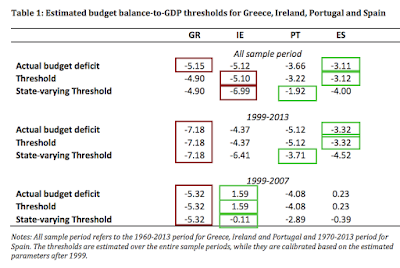 How unique is Ireland within the club of euro peripheral countries? Well, historically, rather unique. Alas, sometimes for the reasons not entirely in our favour.

Quote: “Fiscal policy authorities of Greece, Ireland, Portugal and Spain are shown to have, on average, historically followed a “spend-and-tax” model of fiscal adjustment, where government spending is decided by the political process, and the burden of correcting fiscal disequilibria is entirely left to the tax instrument.”

But before then, what were the pre-conditions (thresholds) for taking action? “During the 1960-2013 period for Greece, Ireland and Portugal and during the 1970-2013 period for Spain, we find that the threshold estimate for the budget deficit-to-GDP ratio, which led to different fiscal correction regimes, was on average 4.90% for Greece, 5.10% for Ireland, 3.22% for Portugal and 3.12% for Spain.”

In other words, Ireland had the greatest tolerance – over the entire period – for deficits, opting to wait until average deficit as % of GDP would hit above 5.1%, well above Greece (4.9%) and the rest of the peripheral states.

The post 18/10/15: Is Ireland a Euro Periphery Outlier? Some Historical Data appeared first on Silver For The People.

This article was posted in ecb, Euro, Greece, Ireland and tagged GDP, Uncategorized. Bookmark the permalink. Follow comments with the RSS feed for this post.Comments are closed, but you can leave a trackback: Trackback URL.