In 2015, equity investors looking for yield suffered death by 394 cuts.

The ratcheting down of payouts to shareholders is a function of weak commodity prices, sluggish growth dampening corporate profits, and a tightening of credit conditions. This combination—and in particular the stingier lending—could exacerbate the carnage already seen this year in financial markets, further dampening economic activity.

The number of payout cuts enacted was almost 100 more than at the outset of the Great Recession—a time when the implosion of Lehman Brothers Holdings Inc. caused equity markets to plummet in the later stages of the third quarter: 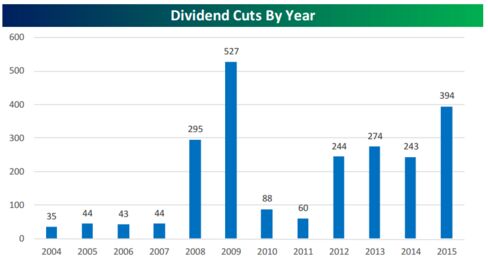 The post Here It Comes: Dividend Cuts In 2015 Exceeded 2008 Level appeared first on Silver For The People.

This article was posted in Great Recession, Lehman Brothers, Standard & Poor's and tagged Uncategorized. Bookmark the permalink. Follow comments with the RSS feed for this post.Comments are closed, but you can leave a trackback: Trackback URL.