A crisis in American housing: higher rents, expensive homes, and lower incomes are a problem impacting all Americans. 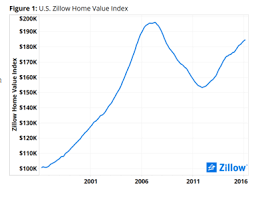 Americans are realizing something is wrong with the system.  You can see it this year with the rise of outsiders in both political parties.  People realize the system is rigged.  Instead of some folks that kowtow and simply move forward like subservient lemmings, millions are mobilizing and taking action.  Many are voting with their wallets.  The number of renter households has increased by 10 million over the last decade while net homeowners has been stagnant.  The bailouts were supposed to help American families but what happened is that many were kicked out of their homes (for missing payments) and then giving them to banks that also missed much larger payments (too big to fail).  People got a quick education on how things work.  This is why the homeownership rate fell dramatically yet somehow, homes sold to investors and now rents are at all-time highs while incomes are stuck in neutral.  This is a major problem and people are taking notice.

A crisis in American housing

Zillow has some really good research on the topic.  You would think that rising home prices and rising rents would be a sign of more families buying.  Yet it is more of a sign of continued manipulation in the market.  It is also a sign of outside money, either from big investors, Wall Street, or foreign money pushing up values and crowding out regular families from buying.  The Fed has set the stage.  By creating a low interest rate environment, big pools of money are hungry for yield in nearly any sector.

The post A crisis in American housing: higher rents, expensive homes, and lower incomes are a problem impacting all Americans. appeared first on Silver For The People.

This article was posted in Bailouts, Crisis, FED, Incomes, money and tagged Uncategorized. Bookmark the permalink. Follow comments with the RSS feed for this post.Comments are closed, but you can leave a trackback: Trackback URL.