The US is becoming Argentina 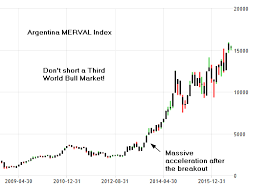 Although many are confused by these markets, there is a simple explanation for every strange thing going on right now:  The United States is rapidly devolving into a Third World country.

We’ve got the politicians to prove it.  On one side is the classic insider, handing out favors to cronies and corporate big-shots while not-so-secretly covering her tracks and lining her pockets; on the other side is the classic Strongman, full of machismo, bluster, simple sloganeering, and even a trademark hair-do/spray tan combo.  Just slap some epaulets and a row of chest medals on Donald’s blazer and he could easily pass for our first Yankee Generalissimo.

But the analogy goes even deeper with monetary policy, debt, and spending.  We are swimming in debt and deficits, with no other plan but “even more,” which leads eventually to an Argentina-style default. Actual economic growth is anemic, while the insiders that live in Washington D.C. and environs grow ever richer on fat contracts and sweetheart legislative deals for big corporations, written by an ever-expanding minion army of lawyers and lobbyists.  It’s Third World cronyism on a grand scale.

The post The US is becoming Argentina appeared first on Silver For The People.

This article was posted in argentina, Debt, US and tagged Uncategorized. Bookmark the permalink. Follow comments with the RSS feed for this post.Comments are closed, but you can leave a trackback: Trackback URL.