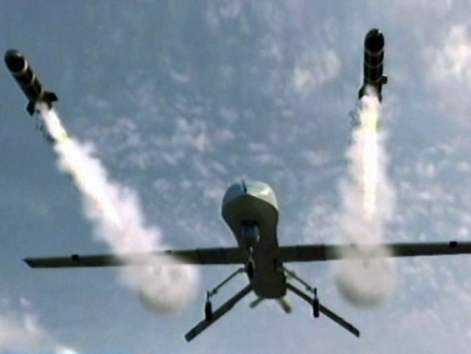 Officially, they aren’t admitting anything.

Unofficially, the possibility that Russia or some independent hacking group caused the failure is clear to most observers, and a great worry to the military leaders and politicians running the system.

It wasn’t just some glitch, and it wasn’t an insignificant system that went offline.

The DoD’s secret computer network, SIPRNet, which serves as a support network for classified intelligence on drone targets, as well as target location data, was interrupted. And during the time period when the system interference occurred, a number of drone strikes went wrong.

The problem was only noticed after-the-fact, but was later attributed as a possible source of the operational failures throughout the Middle East region – including Syria. But nothing is proven.

The US Air Force is reportedly looking into a computer system outage at a base it uses to operate armed drones over Afghanistan, Pakistan and Syria. The failure could be linked to a number of fatal battlefield incidents days after it was revealed.

However, the Air Force has kept silent, refusing to publicly elaborate on either the outage or the possible impact it had.

The system failure dates back to September 9, but was only discovered nearly a month later from a contractor notice from the government.

The Air Force posted a bid on FedBizOpps, the government’s primary tender market, on October 7, saying that “the SIPRNet system currently in operation at Creech AFB failed and critical services were impacted.”

The network is essential for Nevada-located Creech Air Force Base, a “launch pad” for America’s armed drones, such as Predators and Reapers, which the US military operates over Syria, Pakistan, Afghanistan and elsewhere.

The notice read that the services were “somewhat restored” and stabilized via “multiple less powerful devices,” but help was need to upgrade the system.

As SHTF just reported in an exclusive, the Navy has been soliciting major upgrades and investing in new protocols to protect its electronic communications on board SSBN nuclear submarines and other classes of subs.

Solicitation notices on FedBizOpps.gov reveals that there is considerable effort going into upgrading, fortifying and securing communications technology– particularly for SSBNs, one of the most important pieces on the chess board.

Nuclear submarines must be in constant communication around the world, in any waters, and be able to avoid detection. However, compromised communications could cutoff communications or render subs ineffective when they are needed most.

Here’s a list of just some of the very recent solicitation notices for some serious electronic warfare defense upgrades (click to enlarge): 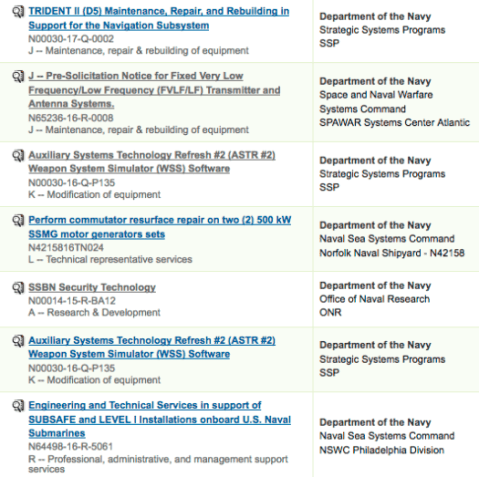 There is obviously a major problem, and it appears that the U.S. military is working feverishly to cover the gaps in its network security. But vulnerabilities will always appear.

The coming age of warfare will be deadly and unpredictable.

Both Russia and China now possess immense powers in electronic and cyber warfare, and have been gearing up for a 21st Century world war on all fronts.

Now, there is a real world incident (not just hypothetical). A drone base was effectively taken offline; and drones have become an essential part of the Obama Administration’s strategy in the region. It seems that the U.S. was caught with its pants down – not that they have admitted it to the public.

If this is indeed what took place, it is a potent and chilling demonstration of the new factors in warfare that will come into play in a huge way, especially if two or more world powers were to clash in warfare.

Electronic Over-Dependence in a Collapsing Empire?

The big problem that United States faces is not an issue of military superiority directly; obviously, more money is poured into wars and weapons than anything else. It is part and parcel to why foreign policy is so aggressive.

The problem is one of empire strain, of fatigue in the American public’s support for war and a depletion of the strength and numbers of its service men and women.

After 14 long years in Afghanistan, bitter blowback in Iraq and a problem with radical Islam that keeps cropping up like the hydra, the United States is in danger of being sapped in the long game. If it is compensating through leverage in the cyber war, then it has even greater vulnerabilities.

This problem of fatigue contributed significantly to the long, painful and confusing military loss in the quagmire of Vietnam.

And it was mirrored in Russian’s futile Afghanistan adventure in the 80s – the effect was intentional. This tactic was claimed by elite strategist of the grand chessboard, Zbigniew Brzezinski, who was Carter’s National Security Advisor; it was Brzezinski who directed Operation Cyclone and other secret programs to arm and fund the Mujahideen as a proxy against the Soviets.

In the end, Brzezinski attributes this to the collapse of the Soviet Union. As Counterpunch reported:

Brzezinski: Regret what? That secret operation was an excellent idea. It had the effect of drawing the Russians into the Afghan trap and you want me to regret it? The day that the Soviets officially crossed the border, I wrote to President Carter: We now have the opportunity of giving to the USSR its Vietnam war. Indeed, for almost 10 years, Moscow had to carry on a war unsupportable by the government, a conflict that brought about the demoralization and finally the breakup of the Soviet empire.

Afghanistan has gained a reputation as the graveyard of empires over the decades, centuries and millenia of human wars and conquests. The U.S. has now been actively engaged in the region for even longer than the Russians were, and the economic pressures on the dollar are bringing things to a head.

Yet, with this knowledge clear and present, the Americans continue to be drawn into a deeply flawed and unwinnable struggle in the middle east to inflame, then control, radical Islamic terrorists in the form of ISIS, al Nusra, al Qaeda and other sponsored groups (who are given Western arms, funds, training, air cover and proxy support, etc.).

Even as this dangerous and ill-advised path to regime change continues, the U.S. intentionally prods for war against Russia and Iran, among others.

The remaking of world order is going to be nasty and brutal indeed. Prepare accordingly.

This Cloak Makes Russian Military Invisible to Enemy: “For First Time, These Weapons Do Exist”

“Doomsday EMP Weapon” Could Kill 90% of U.S. Population… And Government Won’t Save You