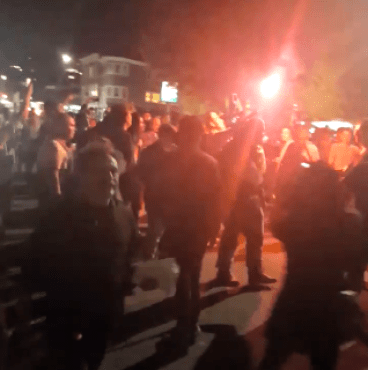 This article was written by Paul Joseph Watson and originally published at Infowars.com.

Editor’s Comment: Leftist have lived up to the hype, and thrown temper-tantrum violence as everyone expected. How anyone could have supported Hillary, rather than support her prosecution is something that will continue to boggle the mind. In the meantime, angry and disappointed DNC voters are waging violence and tempting the country into a full-blown martial law scenario.

Probably, these episodes will die down within hours, but there is always the threat that such non-sense and support for a would-be tyrant will continue and flourish. Just look how far George Soros & co. took the riots in Ferguson, Baltimore and dozens of other cities. The population’s buttons are being pushed, and the country is being tested. Best to be prepared just in case things get further out of hand.

Windows were broken and cars were set on fire in Oakland as irate protesters lit flares and blocked freeways.

“A protestor was struck by a vehicle on the eastbound lanes of Highway 24 although it was not immediately clear what the extent of the victim’s injuries were,” reports Fox 5.

Students also hit the streets of Eugene and Portland, Oregon to protest against a democratic election. Demonstrators could be heard chanting “bitch” and “f*ck Trump” as they marched in unison.

Some of the students burned a U.S. flag.

The irony of the riots is that many pro-Clinton media outlets previously circulated the talking point that Trump supporters would be likely to stage violent unrest after they lost the election.

Twitter was also inundated with death threats, with leftists either hoping for or personally expressing their willingness to carry out Trump’s assassination.

This article was written by Paul Joseph Watson and originally published at Infowars.com.

This article was posted in 2016, America, Civil Unrest, Conspiracy Fact and Theory, divided, Headline News, Trump and tagged election, Hillary, riots, unrest. Bookmark the permalink. Follow comments with the RSS feed for this post.Comments are closed, but you can leave a trackback: Trackback URL.