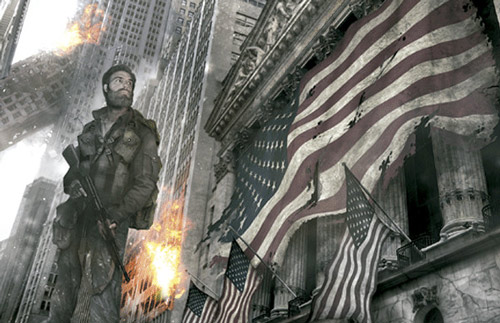 “Revolution is probably the only solution.”

That seems to be the conclusion of Paul Craig Roberts, a respected member of Reagan’s Administration and former Assistant Secretary of the Treasury.

The crisis has simply been building.

Like others, Dr. Roberts highlights the promises of Donald Trump and the reasons behind his sweeping populist victory.

However, he warns that if Trump “pulls an Obama” and sells out the people to whom he has promised change, violent revolution will likely be the result – because the rage against the machine is “permanent.”

He told the Richie Allen Show:

Paul Craig Roberts: “The good thing about the election is it showed the American people could defeat the establishment; it could defeat the oligarchs; it could defeat their candidate. So that is a good thing; it shows that the people finally woke up. They understood that a lot was at risk. They were not being served by the government – and the fact that they realized this. They are not as insouciant as they have been. They are more aware. They were determined; they were not influenced by the propaganda against Trump. And so that’s what’s good, and this will stay. I think this will be permanent.

Now if Trump pulls and Obama and sells them out, the question is will they get demoralized and give up, or do they get more angry and the next time we see a bloody revolution. You know, sometimes, when you had so much corruption – in the United States, every institution is totally corrupt, everyone. The oligarchy have corrupted everything. When you get so much corruption, sometimes you can’t have a change without bloodshed. People have to die.

Richie Allen: “And you’re a pacifist.”

Roberts: “Our founding fathers were aware of this. Thomas Jefferson was explicit about it. So what we may see if Trump is blocked or he gives up or nothing can happen, people they could just give up or they could just get angry.”

Why? Because people are fed up with the establishment, hungry for change and too desperate to ignore the crisis they are in.

The economic situation alone has driven the masses to the edge. Without a decent standard of living and a secure place in or near the middle class, things are going to be unstable and ripe for a volatile chemical reaction.

Although Paul Craig Roberts statements seem alarming, they are in line with everything that has been happening economically, and secondarily politically, for the past several cycles and through the entire Obama presidency.

Watch the full interview via The Richie Allen Show:

Paul Craig Roberts “The People Spoke But We’ll Have Violent Revolution
If Trump Lets Them Down!”

History proves that things are teetering towards revolution, and if a President Trump doesn’t offer satisfaction, then people may very likely turn towards their only remaining alternative.

Roberts: “I think it only could be violence, because if you try to do civil disobedience, you’re individually acting and you have no protection, but violence requires large numbers and there’s protection in numbers. If I tell them, ‘I’m not having anything to do with you, I’m not paying my taxes,’ they’ll just come pick me up. But there’s tens of thousands, hundreds of thousands, millions saying, ‘Screw you, we’re going to kill you’, you can’t pick them up.”

“And so, I think that if – you see, look, Richie, everyone needs to understand this. The living standards of the average American have collapsed. All this b.s. about America being rich, and they’re always so wonderful and the streets are paved with gold, but it’s all B.S. For 20, 30 years the living standards have been collapsing – since the Clinton regime. Collapsing. We have half of the 25 year old Americans living at home with their parents because they cannot get employment that lets them have an independent existence. They cannot pay their rent. We have huge numbers of university graduates suffocated by student loans. They can’t get jobs that let them pay the loans off. We have more people aged 24 through 34 years of age living at home with their parents than living independently.”

“There are no good jobs created. The jobs reports, to the extent that they aren’t just fabricated, they are part-time, low-pay jobs without any benefits. No pension. No health benefits. They country, the people are being destroyed. The retired people have had no interest income on their savings for eight years – they’re having to draw down the money they expected to produce an income to see them through their retirement. People are suffering. They can’t buy houses – if you can’t form a household, you can’t buy a house. You can’t buy home furnishings, appliances.”

“The whole economy is hurt. So it’s a really serious economic situation. The domestic market is almost non-existent; it can’t grow because there’s no income growth for anybody except the 1% – and there’s a limit to how much the 1% can consume. So the economic situation is very bad. There’s debt everywhere. Individuals don’t have any discretionary income – except for a very few. And so that type of situation, if it worsens, at some point people say ‘I can’t survive… I’ve nothing to lose’. […] This is a situation here. We’re talking about the United States is degenerating into a third world country.”

This is not just a question of Trump’s performance, qualifications or ego in office.

This is a systematic problem that spans decades of the American history. The Clintons and Bushes are symptoms of that problem, and the system underestimated the intense angry and dissatisfaction against those entrenched oligarchs and elites.

However, as Paul Craig Roberts makes clear earlier in his interview here, Trump faces a significant threat of being undermined by his “advisors,” staff, cabinet appointments and so forth, particularly if they are loyal to the establishment, as nearly every ‘experienced’ individual in these positions seems to be.

Neocons and the like could swiftly pervert yet another “change” administration into an establishment cover operation for the continuity of their control system. Indeed, even with the best of intentions, Trump faces an uphill battle at overturning the status quo. Indeed, the system may well be plotting to unleash a new wave of economic decline that they can blame him for, and break the dam of unrest that has been swelling.

The larger storm is still brewing. Roberts argued in his column, ‘The working class won the election‘ that:

The US presidential election is historic, because the American people were able to defeat the oligarchs. Hillary Clinton, an agent for the Oligarchy, was defeated despite the vicious media campaign against Donald Trump. This shows that the media and the political establishments of the political parties no longer have credibility with the American people.

It remains to be seen whether Trump can select and appoint a government that will serve him and his goals to restore American jobs and to establish friendly and respectful relations with Russia, China, Syria, and Iran.

It also remains to be seen how the Oligarchy will respond to Trump’s victory. Wall Street and the Federal Reserve can cause an economic crisis in order to put Trump on the defensive, and they can use the crisis to force Trump to appoint one of their own as Secretary of the Treasury.

[…] We won’t know what to expect until we see who are the Secretaries and Assistant Secretaries. If it is the usual crowd, we will know Trump has been captured.

[…] If Trump is advised to be conciliatory, to hold out his hand, and to take the establishment into his government, the American people will again be disappointed. In a country whose institutions have been so completely corrupted by the Oligarchy, it is difficult to achieve real change without bloodshed.

The post-election riots against Trump, the Black Lives Matter protests that have pitted police against inner-city people of color and the quieter exercises for martial law and the containment of a domestic uprising all prove that the elite understand what is coming, and while they may have no way to stop it altogether, they may succeed in steering it into meaningless fights and divisions which they can use as a buffer.

Economic devastation and the collapse of the system means that literally tens of millions of people will have nothing left to lose, and nothing better to turn to than mob revolt.

Beware of what’s coming, prepare for long periods of instability and roaming violence, and pray that the system corrects for the benefit of the people of this country once again.

“The Second American Revolution Is Happening” – U.S. Intelligence Agencies Have Started A Counter Coup Against Clinton

“It Is Really Hard To Argue With Trump About This”: Face It, America Is In Decline

“Revolt of the Elites”: Society Is Divided, Self-Absorbed and Powerless to Stop Them

Who Are The “Deplorables” And Why Do They Refuse To Be Trampled Upon?

This article was posted in "elite", Conspiracy Fact and Theory, Decline, Economic, Emergency Preparedness, Headline News, Martial Law, oligarchy, Protest, revolution, Rigged, Trump and tagged riots. Bookmark the permalink. Follow comments with the RSS feed for this post.Comments are closed, but you can leave a trackback: Trackback URL.