Recount What? As They Hunt For Missing Votes, Trump Argues “Millions Voted Illegally For Hillary” 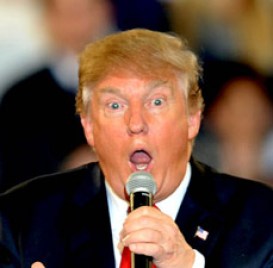 Trump can’t believe that Team Hillary is pulling this crap.

Editor’s Comment: It is hanging chads all over again… well, really, nobody knows exactly which voting irregularities have supposedly spurned the recounts in Wisconsin, Pennsylvania and Michigan, the exact three states that would need to be overturned in order to grant Hillary’s wish-from-a-genie to be president at all costs.

Meanwhile, back in reality, President-elect Trump calls out the fact that literally millions of people voted illegally for Hillary, and the sitting president even encouraged them to do so. Project Veritas and others captured video admissions that Democratic operatives are aiding and abetting shady voter drive efforts that involve bending the rules to the point where undocumented immigrants, dead people still on voter roles and stuff ballot operations are done de facto to rig, distort and, if necessary, steal elections.

So while they recount, looking for a needle in the haystack, and a Hail Mary! hope and prayer, everyone is wondering why no one goes to jail at the top of the ticket, and in spite of massive illegal activity, and why no one in America seems to care that things have deteriorated into the state of a banana republic.

In what is either Trump’s latest trolling of the already neurotic media, or just his conversion to “conspiracy theorism” much to the delight of Russian propaganda, “fake news”-spotting anonymous groups everywhere, moments ago the President-elect tweeted that he would have won the popular vote if “millions of illegal votes” were discounted.

“In addition to winning the Electoral College in a landslide, I won the popular vote if you deduct the millions of people who voted illegally,” Trump wrote on Twitter.

In addition to winning the Electoral College in a landslide, I won the popular vote if you deduct the millions of people who voted illegally

The statement, the latest in a series of 12 consecutive tweets provoked by Jill Stein’s campaign for a recount in Wisconsin, Michigan and Pennsylvania may ironically help Stein’s cause should Trump’s tweet be seen as “confirmation” of illegal voting during the presidential election, albeit in the other direction… although by now the entire narrative is so absurd and surreal, not even Salvador Dali would dare touch it.

Trump – who won the one vote that mattered – also tweeted that he would have won more easily if he had based his campaign strategy on winning the popular vote, instead of visiting states with a larger number of Electoral College votes.

states instead of the 15 states that I visited. I would have won even more easily and convincingly (but smaller states are forgotten)!

Several hours later on Sunday, Trump followed up with a question for the media: why isn’t it reporting on “serious voter fraud in Virginia, New Hampshire and California.”

Serious voter fraud in Virginia, New Hampshire and California – so why isn’t the media reporting on this? Serious bias – big problem!

Earlier on Sunday, Trump predicted that the recount effort in three states will not change the results of the election.

“Hillary Clinton conceded the election when she called me just prior to the victory speech and after the results were in. Nothing will change,” he tweeted. As reported yesterday morning, Clinton’s campaign announced it would participate in the Wisconsin recount, which is already set to begin this week, despite admitting there is no actual evidence of vote rigging.

Clinton is currently leading Trump by more than 2 million in the popular vote. Politicians including Bernie Sanders, have called for an examination of using the Electoral College to decide who wins the presidency, rather than the popular vote.

Trump warned during his campaign that the election could be rigged, though election officials scoffed at the claims, noting the country’s use of a decentralized system in which ballots are counted by thousands of Democratic and Republican officials across the country.

In retrospect, it is Hillary who is now taking advantage of recount hopes resulting from an allegely rigged vote, while the latest twist to come from Trump himself is that the vote was indeed rigged with “millions of people who voted illegally” despite Trump’s victory.

The recount push started one week ago after a group of election lawyers and computer scientists claimed the election results in the three states could have been manipulated or hacked by Russians.

However, there is no evidence of millions of people voting illegally, as Trump suggested on Twitter, an allegation which ironically would benefit Clinton should other states follow suit with similar recount efforts.

In short, a total mess, which probably is bullish for stocks.

This article was posted in aftermath, citizen, Conspiracy Fact and Theory, dead, Illegal, Jill Stein, popular vote, recount, register, Trump, voting fraud and tagged Hillary. Bookmark the permalink. Follow comments with the RSS feed for this post.Comments are closed, but you can leave a trackback: Trackback URL.