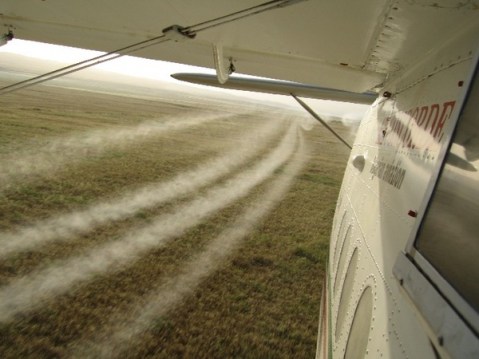 A week or so ago, conspiracy theorists were scratching their heads as to why more than 8500 people in Australia would suddenly have to a hospitalized in a concentrated wave allergies that left several people dead.

Now, a similar event has been reported in Kuwait, where reports claim that thunderstorm activity has triggered a mass reaction and nearly a thousand people were taken to the hospital with severe asthma; again, several people died.

So what is really going on? Is a covert, deadly substance being deliberately sprayed from planes (as governments did back in the sixties, and countless times since)? Or is is just something harmful being swept up from nearby farms and factories?

Whatever the explanation, the pattern is completely bizarre, especially since it has now happened in back to back cases, despite the fact that the phenomenon has been sparsely documented and extremely rare, to the point of being unheard of.

The following was translated from Arabic to English via Google, so there may be errors or poor interpretations.

But at this point, there isn’t much else to go on.

Via Hamrin News (a Kurdish-oriented news outlet published from Germany):

Kuwait – 1-12 (KUNA) – Undersecretary of the Kuwaiti Ministry of Health, Dr. Khalid Al-Sahlawi said that the country’s hospitals and five deaths were recorded during the past two days due to emergency cases of patients with asthma were suffering from suffocation and breathing difficulties.

He Sahlawi in a press statement Friday that the 844 emergency entered into the country’s hospitals during the past two days died, including five cases, three of which in Mubarak Hospital and two at the Amiri Hospital while entered the 26 cases in intensive care and 45 cases to the wings with out the rest of the cases after receiving the necessary treatment.

He explained that the sections of accidents in hospitals declared a state of emergency and prepare to receive critical situations and make the necessary first aid and called for emergency contact numbers in case of any emergency through the 112 ambulance and 151 medical consultations.

While officials are quick to reassure everyone that it is perfectly normal for so many people to be suddenly affected, this really isn’t a routine occurrence, and somebody must have better explaining to do.

Just like the Zika virus, so-called “Thunderstorm Asthma” wasn’t even a thing that anyone talked about until recently when it supposedly hit Australia a couple weeks ago on November 21st, sending some 8,500 people to the emergency room in a matter of hours and killing eight people so far.

Emergency officials described the scene like “150 bombs going off,” and at the height of the emergency, someone was dialing 9-1-1 for an ambulance every 4.5 seconds as people en masse began having asthma and heart attacks. Emergency services were so overwhelmed in Melbourne, they ran out of ambulances and even other emergency vehicles like fire trucks and police cars, and they were forced to use non-emergency vehicles. One girl reportedly died in her families arms on their front lawn waiting for an ambulance.

Officials claim it works like this: pollen fills the air and then, after a sudden weather change, a huge thunderstorm blows through, causing the pollen to swell and burst into nanoparticles. When the rain stops, the mass of “thunderstorm asthma” ensues.

An official Wikipedia page for “thunderstorm asthma” explains that it has happened in a handful of cities over the last two decades, but, as Melissa Dykes of Truthstream Media points out below, A) there have been no recorded incidences of this prior to the late 80s and B) that Wikipedia page did not exist until November 22, a day after the “rare” thunderstorm asthma hit Melbourne November 21.

Does Rare “Thunderstorm Asthma” Just Sound Made Up or What?

While it will be difficult to know just what substance, particle or chemical affected all of these sick people, one thing is plenty clear: society is not equipped to take care of all of us if a bigger enough emergency takes place. It isn’t due to any shortcoming on the part of medical staff, but rather the overwhelming catastrophe of something wide enough to be like a contagion.

There just isn’t enough manpower or ambulances enough to save us all. That’s why it is essential to be equipped with emergency medical supplies and skills, as well as CBRN-rated bio-protective gear, and to avoid any situations that might expose anyone particularly vulnerable in your group. Those with severely weakened immune systems will need to be treated with special caution, particularly in any events that resemble those described above.

Are You Ready Series: Pandemic Preparedness

New SARS-Like Virus Spreads From Bats to Humans: “Not ‘If’ There Will Be An Outbreak”

This article was posted in aerosol, asthma, Australia, Conspiracy Fact and Theory, Emergency Preparedness, Headline News, illness, Kuwait, mystery, spraying, thunderstorm, unexplained. Bookmark the permalink. Follow comments with the RSS feed for this post.Comments are closed, but you can leave a trackback: Trackback URL.