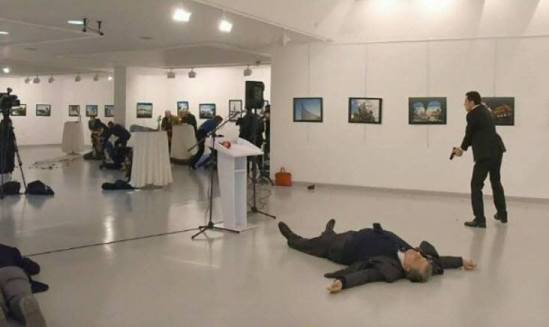 Will there be peace again in our lifetimes? That remains to be seen.

As you have probably heard, Russian Ambassador to Turkey Andrey Karlov was shot dead Sunday night at an art gallery right as he was about to give a speech.

The shooter, identified as 22-year-old Turkish policeman Mevlüt Mert Altıntaş, reportedly fired at Karlov eight times, hitting him multiple times in the back before he fell to the ground on his back.

Was this event staged to thwart peace talks between Turkey and Russia to prevent an end to the Syrian war? It is bizarre enough to have even mainstream sources suggesting the whole thing could have been – an inside job.

Putin was reportedly about to announce a total ceasefire across Syria.

This shooting happened just before Russia and Turkey were scheduled to hold peace talks with Iran concerning Syria – but now, officials from both countries will be dealing with an investigation of this assassination.

These peace talks were planned without the involvement or participation of the United States or United Nations in what was being referred to as “a snub to Washington”.

Now, several Russian officials, including Putin, are convinced it was an effort at sabotage by the West; and President Erdogan has made similar statements for the Turkish side.

According to Unilad, President Putin vowed to find out who ‘directed’ the gunman’s hand:

[Putin said:] “This murder is clearly a provocation aimed at undermining the improvement and normalization of Russian-Turkish relations, as well as undermining the peace process in Syria promoted by Russia, Turkey, Iran and other countries interested in settling the conflict in Syria.”

[Erdogan said] “I believe this is an attack on Turkey, the Turkish state and the Turkish people, and also a clear provocation … [in terms of] Turkish-Russian relations. I am sure our Russian friends also see this fact. Both Turkey and Russia have the will not to be deceived by this provocation.”

‘We need to know who gave the orders’: Putin comments on ambassador assassination in Ankara

According to the Independent:

Vladimir Zhirinovsky, who leads the right-wing nationalist Liberal Democratic Party of Russia, said the killing was “a false flag operation by the West”.

Alexey Pushkov, the former head of the foreign affairs committee of the Russian State Duma, or lower house of parliament, claimed the killing was a direct result of media “hysteria” concerning Aleppo, purveyed by “enemies” of Moscow.

Frantz Klintsevich, the deputy chairman of the upper chamber of the Russian Parliament’s defence and security committee, reportedly said:

“It was a planned action. Everyone knew that he was going to attend this photo exhibition. It can be Isis, or the Kurdish army which tries to hurt Erdogan.”

“But may be – and it is highly likely – that representatives of foreign Nato secrets services are behind it. What has happened is a true provocation, a challenge. It is a challenge for Russia,” he added.

The stage was certainly set, as it were. So how did the shooter get access to what would have been a tightly controlled, diplomatic event with many high level people and tight security present?

It is suggestive of an inside job which may have been highly coordinated behind the scenes – as even CNN made clear:

Moreover, it is also being widely reported that Peter Polshikov, said to be head of the Latin America Department of the Russian Foreign Ministry, was also found shot dead at his apartment in Moscow. The connection to the other shooting is unclear, but suggested.

According to the Sun:

A HIGH-ranking Russian diplomat has been found dead from gun shot wounds in Moscow, it is reported.

Petr Polshikov, 56, was found with a bullet wound to his head at his home in Moscow’s Balaklavsky Prospekt, according to local media.

The circumstances of the shooting remained unclear, and it is understood police are examining all possible theories as to his death.

Several other terror attacks, including a truck plowing into people in Berlin, took place yesterday, suggesting a wider coordination of attacks.

Something bigger is going on. Some very powerful people want to make sure that true peace is not an option.

No Blood? Reporter at Paris Shooting Aftermath Says “You Can See the Blood on the Ground Which Has Been Put There”

This article was posted in asassination, Conspiracy Fact and Theory, Erdogan, Headline News, Kurdish, Peace, Putin, shooting, terrorism, United States and tagged NATO, syria, turkey. Bookmark the permalink. Follow comments with the RSS feed for this post.Comments are closed, but you can leave a trackback: Trackback URL.