“Whole of Global Economy Could Be in Shambles”: Fed-Initiated Crisis Looms Over Trump Presidency 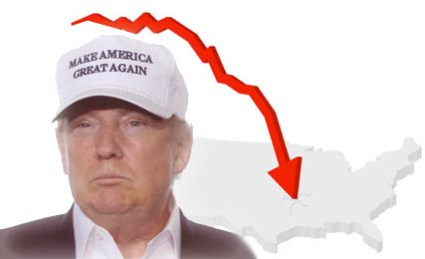 This article was written by Brandon Smith and published at his Alt-Market.com site.

Editor’s Comment: This confrontation between the Federal Reserve and Donald Trump – painted as a populist outsider willing to destabilize the system – has been brewing for sometime. SHTF has reported many times on the double game of timing rate hikes to score politics points – and now, to dump a cycle that has been long overdue for a crash. Unfortunately, these are fundamentals at work. The only question now, is how badly it will drag on the economy, and what the optics of that downturn could be – i.e., will Trump be vilified, and to what degree.

It is more prudent than ever to prepare for a potential downturn, and attempt to insulate yourself from what could be a prolonged economic collapse. If good times come instead, then enjoy them with the knowledge that your family was prepared to endure even the worst of what may come.

For years, alternative economic analysts have been warning that the “miraculous” rise in U.S. stock markets has been the symptom of wider central bank intervention and that this will result in dire future consequences. We have heard endless lies and rationalizations as to why this could not be so, and why the U.S. “recovery” is real.  At the beginning of 2016, the former head of the Dallas branch of the Federal Reserve crushed all the skeptics and vindicated our position in an interview with CNBC where he stated:

“What the Fed did — and I was part of that group — is we front-loaded a tremendous market rally, starting in 2009.It’s sort of what I call the “reverse Whimpy factor” — give me two hamburgers today for one tomorrow. I’m not surprised that almost every index you can look at … was down significantly.” [Referring to the results in the stock market after the Fed raised rates in December.]

Fisher continued his warning (though his predictions in my view are wildly conservative or deliberately muted):

“…I was warning my colleagues, “Don’t go wobbly if we have a 10-20 percent correction at some point. … Everybody you talk to … has been warning that these markets are heavily priced.”

Here is the issue — stocks are a mostly meaningless factor when considering the economic health of a nation. Equities are a casino based on nothing but the luck of the draw when it comes to news headlines, central banker statements and algorithmic computers. Today, as Fischer openly admitted, stocks are a purely manipulated indicator representing nothing but the amount of stimulus central banks are willing to pour into them through various channels.

Even with the incredible monetary support pooled together by international financiers, returns on equities investments continue to remain mostly flat.  It would seem that the propping up of indexes like the Dow has been only for the sake of keeping up appearances. For many people, revenue is barely being generated.

Unfortunately, the majority of Americans do not care to educate themselves on the finer points of finance. Their only relation to the health of the economy is their daily glance at the Dow. If it is green, or at all time highs, they assume that all is well, even if their gut is telling them something is not quite right.

The elites that stand at the helm of the Federal Reserve understand this dynamic very well. They are not stupid. They know that the whole of the global economy could be in a shambles but as long as stocks remain positive the masses will continue to ignore reality until the flames of destabilization are at their very doorsteps.

With this fact in mind one might think that the Fed would consider it in their best interest to keep stimulus measures operating indefinitely; but that is not what they are doing.

In fact, the Fed along with other central banks like the ECB has been slowly peeling back pillars of support from markets that have been in place since 2008-2009 and leaving the system open to a crisis event that should have been dealt with years ago. I examined this process of deliberate destabilization in my article ‘The Global Economic Reset Has Begun.’

In that piece I outlined the three major pillars holding up the U.S. market system and certain parts of our economy and how they were being systematically removed. The first pillar was the use of bailouts and quantitative easing measures. These were diminished through the implementation of the Fed “taper,” which I predicted would happen three months prior that year.

The second pillar was the use of near zero interest rates, which allowed numerous banks and corporations to access low-cost and no-cost overnight loans from the Fed. These companies then used these loans in large part to support a never-ending program of stock buybacks, which reduced the stock pool and artificially boosted the values of the remaining stocks.  I predicted in August of 2015 that the Fed would hike interest rates and that this would be the beginning of the end for the stock buyback bonanza. The Fed hiked rates in December of that year.

This process of removing backdoor manipulation through low interest rates should be our main concern right now. Early in 2016 I believed that the Fed would reach a position in which it would finally unleash a series of rate hikes. I did not think they would be so blatant as to wait until right after the U.S. presidential election to do so. I was wrong.

This is why I eventually predicted the launch of a series of rate hikes starting right after the election of Donald Trump in my article ‘World Suffers From Trump Shell Shock — Here’s What Will Happen Next.’ The Fed has now once again hiked interest rates with assertions that they will be “accelerating” such hikes throughout 2017.

As I have been arguing for most of the past year, the election of Donald Trump was inevitable and would precede the triggering of the final stage of our ongoing economic crisis. I came to realize that the Fed’s timing of their latest rate hike is highly strategic. Not only does it set the stage for a series of hikes that will crush U.S. stock markets this coming year and finally shock the public out of their fiscal stupor, but it also maneuvers the crisis right into the lap of Donald Trump and the conservative movements that support him.

Beyond this, it perpetuates an increasing Left/Right division in America. Think about it — during a fiscal crisis under Trump, tiggered by accumulating Fed rate hikes, liberals will immediately set upon Trump as the culprit, while conservatives will immediately defend Trump as a victim of Federal Reserve meddling.

The Federal Reserve and the mainstream media are already composing the narrative by stating that Trump’s potential economic policies and a widening budget deficit would REQUIRE higher rates at a faster pace in order to be accommodated.

I have heard arguments from some that this tactic would simply not work. That people would “never buy” a narrative in which Trump and conservatives are blamed for a market collapse that was at least eight years in the making. I have to say, this view is incredibly naive.

I understand why people would want to embrace the notion that the public is as savvy as the liberty movement when looking at economic events, but this simply isn’t reality. A large portion of the U.S. population identifies with the “Left” end of the political spectrum. We have already seen how they react in the face of a Trump election win. They are predisposed to believe that Trump is responsible for a market crash regardless of the facts. Not to mention, much of the rest of the world is economically ignorant and will likely jump on the anti-conservative bandwagon during a crisis as well.

But the real master stroke of this strategy on the part of the elites is that it creates the perfect platform for the destruction of the U.S. dollar’s world reserve status — the third and final pillar I mentioned months ago that is supporting our economic system.

Imagine that the Fed’s rate hike frenzy sparks an open feud between the central bank and Trump? Some people might say “Good! Shut the bastards down!” However, this is exactly what the elites want. With the Fed “at odds” with the president of the U.S., faith in the U.S. dollar will plummet. Its world reserve status will be destroyed. And instead of being blamed on central banks, the majority of people around the world will claim it was the fault of Trump.

With a historically sufficient excuse for the end of dollar dominance in hand, the elites can move forward with their great global reset, which includes the replacement of the dollar with the IMF’s special drawing rights as the go-to reserve currency mechanism. The SDR basket is an essential bridge in the formation of a single global monetary authority and a true single global currency.

I believe that the Fed will not only continue hiking interest rates throughout 2017, but that some of these rate hikes may be LARGER than many people expect (50 basis points or more). I believe this will be designed to foster extreme tensions between the executive branch and the central bank.

A few months ago I would have said that Trump may or “may not” be aware of this dynamic and the potential that he is a scapegoat. Now that I have seen Trump’s cabinet picks which include neo-con and Goldman Sachs alumni, I have little doubt that he is fully cognizant of the plan.  I will be writing more on the issue of Trump as a “Trojan horse” in my next article.  In the meantime I would point out that all of the elements of psychological support for stock markets will also disappear in the face of a Trump verses establishment narrative.

All those leftist media outlets cherry picking economic stats and telling half truths to support the recovery lie now have no reason to continue cheerleading for the economy. I expect that propaganda rags like Reuters and Bloomberg will quickly change their tune with Trump in the Oval Office and begin a consistent chorus of negative financial data. Not only will the Fed remove all support from the system, but the mainstream media will be pounding day traders with the kind of “doom and gloom” headlines that they have been criticizing us for over the years.

Make no mistake, the election of Trump may have some in the liberty movement ready to pack up their preps and forget about any national crisis in their lifetimes, but the truth is, vigilance is needed now more than ever. I said it before the election and I’ll say it today — do not get comfortable; the times are about to get even more interesting.

This article was written by Brandon Smith and first published at PersonalLiberty.com. Please visit and support his Alt-Market.com site.

This article was posted in collapse, Conspiracy Fact and Theory, Dollar, Economic, Financial, Rate Hike, SDR, SHTF, stimulus, Trump, zero percent interest and tagged commodities, Federal Reserve. Bookmark the permalink. Follow comments with the RSS feed for this post.Comments are closed, but you can leave a trackback: Trackback URL.