Propaganda War Exposed In Aleppo: “About To Die, Saying Goodbye… But Available for Interview” 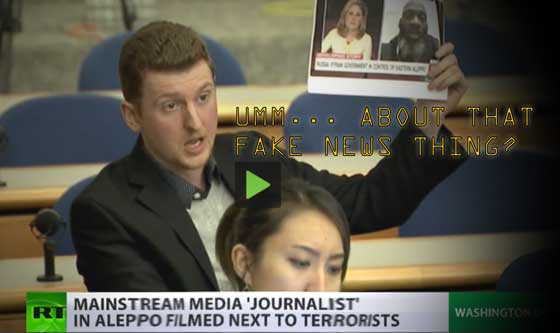 At some point, we have to question what’s going on.

Each new event brings questions about what is real, and what is perception. When did the “media” bring an eye to action of war in Syria, etc. and the attacks of terrorism in Ankara, in Berlin, etc., and when did the “media” create stories and stage crisis for audiences?

Somebody is wagging the dog, and there are plenty of questions to be answered about what is really going on.

Obviously there are many pivotal, deadly events taking place in hotspots across the globe; obviously not all news is manufactured.

But someone is, indeed, wagging the dog. If you haven’t ever heard of, or seen the 1997 film “Wag the Dog,” with Dustin Hoffman and Robert Deniro, it is well worth the watch – because it contains a lesson worth knowing.

Hoffman plays a successful Hollywood producer who is recruited by a senior aide of the president to anonymously stage-manage a made-up war in Albania, complete with green screens and actors playing refugees fleeing bombs. Though no conflict was actually taking place at all in reality, the team successfully sold the American public on the phony story in order to draw attention away from a sex scandal.

How closely it resembles the modern state of war remains up for debate… but the implications are clear. Technology makes this deception possible.

Again and again, the coverage of Aleppo, and the humanitarian crisis of the Syrian war has defied credibility and shown many aspects of complete falsities. White Helmets have been disingenuous in “rescuing” small children from rubble only to feature prominently in photo ops. Twitter has been flooded with a constant stream of images of victims, etc. that were later proven to have taken place at a completely different time and under a completely different circumstance – in other words, faked for the propaganda effect.

Propaganda, by the way, has been officially legalized inside the United States – and entities both obvious and covert inside the media, State Dept. and government have been shoveling into the minds of the American people non-stop.

The real connections between terrorist groups like al Nusra and ISIS to the “moderate rebels” that have been backed by the U.S. and other Western proxies are deliberately obscured, while the perceived crimes and misdemeanors of Assad and Putin are circulated for maximum effect, in spite of a lack of evidence or a firm grasp on the facts.

For years now, reality has been completely contorted to fit the “mirror, mirror, whose the most beautiful empire of all” narrative that the U.S. wishes to uphold… truth has been a complete casualty, and every official channel has warped good strategy, moral high ground and common sense to create war death, destruction and chaos, and tempt Americans and their allies into ever more war and conflict.

And now, as the rebels are being driven out of Aleppo altogether, CNN and other mainstream U.S. news outlets have been featuring reports from embedded individuals who have all been broadcasting their “final reports,” announcing that they death is imminent, and regurgitating talking points about how they are being exterminated, systematically killed, etc.

The only problem is… these reporters are still alive. And they keep reporting, dramatizing, and even glamorizing terrorists suicide bombers.

This is truly too much to believe… this is perhaps the most blatant and forceful propaganda ever seen in warfare. The 21st Century digital media stream is being used in ways never before attempted in live format.

In this powerful piece of journalistic blowback from state-run media outlet RT – who have been categorically beaten up and ostracized as “fake news” trendsetters for Putin’s agenda – now turning the lens around the total bullsh–– being broadcast as truth over the television and Internet:

People extensively cited by the Western media last week as saying their last goodbyes from eastern Aleppo appear to be well and still reporting. Among the latest videos, one of the ‘departed’ is showing off a rebel fighter wearing a suicide vest.

Last week, as the fighting became intensive for the remaining pockets of insurgent-held areas of eastern Aleppo in Syria, numerous reports in the mainstream media cited activists on the ground. Their message was more or less the same: we are about to die under bombs, so we are saying our last goodbyes.

The 10 days of rebel evacuation from eastern Aleppo is wrapping up, and the journalists and activists appear to have survived quite well the ‘Russian bunker busters’ and other threats they reported.

Fighters haven’t been allowed 2 leave. They all have explosive belts & say they won’t be arrested if regime breaks deal pic.twitter.com/QROBWUGprv

A few weeks ago, SHTF reported on the bizarre case of a 7-year old girl and her mother who were on a tweeting spree while fleeing from rubble and bombed out homes in Aleppo – they, too, kept describing their every move as being their last for death; their final message; their goodbyes before death, etc.

After so many repeated tweets warning of their imminent demise, it became apparent that it was something more like a propaganda campaign – picked up by Western media as “real news” when it isn’t. The girl’s most recent tweet was yesterday… alive and well like these other bizarre ‘activist reporters’ featured by CNN and co.

Under attack. Nowhere to go, every minute feels like death. Pray for us. Goodbye – Fatemah #Aleppo

Perhaps Americans have a great deal to fear from Putin’s forceful Russian agenda, and perhaps they do not.

But one thing is certain. the people of America have a major problem in that they CANNOT trust their media. They are broadcasting propaganda and outright lies on behalf of a very lopsided agenda – and yet have had the audacity to initiate a witch hunt against alternative media outlets and independent publishers for what has been so crudely termed “fake news” (WTF ever happened to “op-ed,” critique and analysis anyway?).

CNN is now a clear and apparent propaganda arm of the U.S. government… and there is much wagging of the dog. 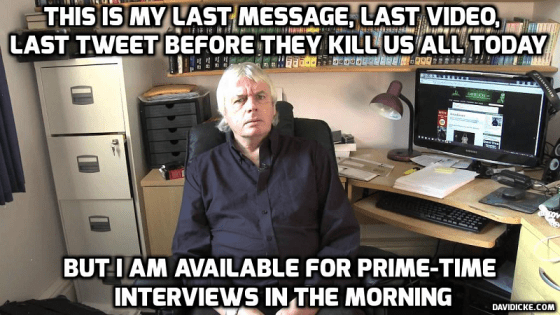 Did A 7 Year Old Really Tweet This – Or Is “Fake News” Driving the Syrian War?

US Complains As Putin Bombs its Terrorists: “ISIS Is An Intentional Creation of U.S.”

This article was posted in CNN, Conspiracy Fact and Theory, Erdogan, Headline News, obama, propaganda, Putin, rebels, Russia, Terrorists, United States, wag the dob and tagged syria, War. Bookmark the permalink. Follow comments with the RSS feed for this post.Comments are closed, but you can leave a trackback: Trackback URL.