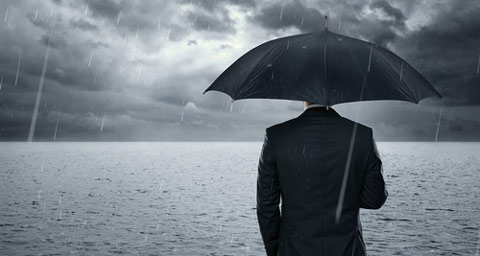 This article was written by Jeremiah Johnson and originally published at Ready Nutrition.com.

Editor’s Comment: One can almost sense that unforeseen events could bring chaos to America. Debts and economic catastrophes could play out, terrorism could strike, wars could spark to life, disaster may hit, and much more. While many have been optimistic about the promises of a new president, and a brighter spot for the free market, global affairs are complicated, and often bite from both ends. With Trump, no one really knows what to expect, and regardless, one man cannot steer all world events in his direction.

There are indeed rocky times ahead, and 2017 could be the year that goes dark. Prepare during this calm before the storm.

A Storm is Coming: Preppers Must Stay Vigilant in 2017

While many believe the shift in government leaders in 2017 will bring us back to better times, one can never be too sure. As my father always said, “Don’t put all your eggs in one basket.” These are still uncertain times, and as Jeremiah Johnson emphasizes in this article – with that uncertainty, we must continue to be ever vigilant in our preparedness endeavors.

ReadyNutrition Fans, this piece is an important exhortation to you – a sort of plea, if you will – to not lose your focus in preparations and your readiness-stance during these times.  With the Dow-Jones Industrial skyrocketing, the Christmas Holidays in full gear, Donald J. Trump about to be inaugurated, and the glow of a new patriotic dawn, everything seems OK, right?  Wrong.  This is not alarmist, but pragmatic.  We cannot allow a burst of patriotic positive fervor to dull the perception of the last 8 years.

Losing our focus is what allowed those 8 years in the first place.

The welcoming of a new President brings renewed hope in our government system; however, there is a lot of road to travel before the country is fixed. While many preppers feel relieved and are slowing their preparedness endeavors down, many preparedness experts are stressing the importance of not giving up. As preppers, we must keep an eye on indicators like the economy and unemployment. Bear in mind that unemployment is deliberately under-reported.  The economy is in bad shape.  Everyone is focusing on the happy times of Christmas cheer and family festivities.  I adjure to your intellects: do not relent in your focus or your activities to prepare for what is still around the corner.

They’re not celebrating festive, happy shopper days in Venezuela, where women are cutting off their own hair and selling it just to buy loaves of bread, or where a whole shopping bag full of Venezuelan Bolivars will not even buy a few days’ worth of essential supplies.

The economy of the United States will take quite some time to recover.  You can continue in the true economy that you have started: the acquisition of supplies, materials, and resources that always hold their worth and have an intrinsic value.  Gold, silver, and precious metals…in physical form…these have worth and lasting, intrinsic value.  For an excellent analysis of just where the United States is economically, I highly recommend an article written by Shaun Bradley on December 8, 2016 entitled “Cash is No Longer King: The Phasing Out of Physical Money Has Begun,” and downloadable for your files.

Another article worth mentioning was written by Susan Duclos of All News Pipeline, entitled “We are Facing the Most Important Battle of All at the Most Dangerous Moment in History,” released on December 10, 2016.  Here is an excerpt from that article:

“We at ANP are noting a lot of optimism from investors with stocks soaring,  to economic confidence reaching new highs, to small business owners, to household spending and even prepping has hit a “multi-year low,” all the articles I am reading are crediting the election of Donald Trump as reason for all this optimism, but as much as I hate to rain on everyone’s parade… now is the most dangerous time in history, not a time to assume just because one man was elected, all the wrongs will be made right, the failing economy will automatically just magically fix itself.”

These timely and sagacious words show that the battle is not over yet.  In this vein, do not lose focus!  Don’t allow the holiday cheer and festive atmosphere to leave you blindsided and thinking that the battle is over!  Other blogsites have reported that sales of emergency equipment and supplies have been drastically on the decline since the election was finished.  Remember: North Korea, Russia, and China still pose a viable threat in several areas of the world, the world economy is quite bad, and the U.S. has by no means recovered from the nightmare of two consecutive Obama terms.

Stay focused.  Gear your shopping and holiday activities to always take a back seat to awareness of the overall situation.  Stock up on your precious metals and long-term food supplies and water procurement capabilities.  Continue to locate and obtain the tools, medicines, and equipment you and your family will need.  Just because the “Captains” are about to change does not mean that the ship will change its course…the one taking it toward a wreck on the reefs.  Don’t let that reef loom up and blindside you to take you unawares.  Enjoy your holidays, but do so with one eye on the festivities and another one on the horizon…aware of what is going on around you.  Do not stop the preparations for even one minute.  Happy holidays, and keep up that good fight!  JJ out!

This article was written by Jeremiah Johnson and originally published at Ready Nutrition.com.

Jeremiah Johnson is the Nom de plume of a retired Green Beret of the United States Army Special Forces (Airborne). Mr. Johnson was a Special Forces Medic, EMT and ACLS-certified, with comprehensive training in wilderness survival, rescue, and patient-extraction. He is a Certified Master Herbalist and a graduate of the Global College of Natural Medicine of Santa Ana, CA. A graduate of the U.S. Army’s survival course of SERE school (Survival Evasion Resistance Escape), Mr. Johnson also successfully completed the Montana Master Food Preserver Course for home-canning, smoking, and dehydrating foods.

Mr. Johnson dries and tinctures a wide variety of medicinal herbs taken by wild crafting and cultivation, in addition to preserving and canning his own food. An expert in land navigation, survival, mountaineering, and parachuting as trained by the United States Army, Mr. Johnson is an ardent advocate for preparedness, self-sufficiency, and long-term disaster sustainability for families. He and his wife survived Hurricane Katrina and its aftermath. Cross-trained as a Special Forces Engineer, he is an expert in supply, logistics, transport, and long-term storage of perishable materials, having incorporated many of these techniques plus some unique innovations in his own homestead.

Mr. Johnson brings practical, tested experience firmly rooted in formal education to his writings and to our team. He and his wife live in a cabin in the mountains of Western Montana with their three cats.

This article was posted in collapse, Currency, Economic, emergency, Emergency Preparedness, Monetary, prepping, stocks, Trump, vigilance and tagged disaster. Bookmark the permalink. Follow comments with the RSS feed for this post.Comments are closed, but you can leave a trackback: Trackback URL.