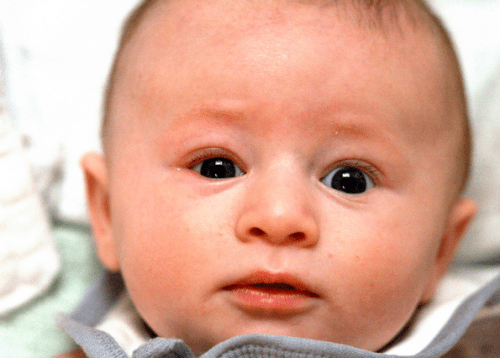 Though it seems like science fiction, it is, in fact, based in reality.

Some of the wealthiest foundations on the planet have sponsored on-going research that dates back to the 1950s where-in scientists attempted to transfuse the vital, healthy blood of young individuals into older, and more fatigued recipients.

And apparently, it has demonstrated considerable positive effects – at least in lab studies with mice.

Nonetheless, the treatments are already taking place in selects labs in some of the most expensive area codes on the map, and where the elite seek methods and procedures for delaying death for as long as possible.

“There are widespread rumors in Silicon Valley, where life-extension science is a popular obsession, that various wealthy individuals from the tech world have already begun practicing parabiosis, spending tens of thousands of dollars for the procedures and young-person-blood, and repeating the exercise several times a year,” Bercovici reported.

The early research is groundbreaking and exciting, he says. But the interest in parabiosis is already getting ahead of the research. He fears that the science will be maligned by a rush to market a “youth serum.” Or worse: A black market for young people’s blood will arise out of the hype.

It seems that the old rumors and loose talk about rich and powerful barons in the ranking power structure drinking blood of babies (and so forth and so on…) may not be so wildly off base after all.

After all, many have speculated whether the bizarre blood shot eyes of David Rockefeller (in photo below) are not evident of many attempts at treatment to keep the aging oligarch alive – he is now 101 years old. 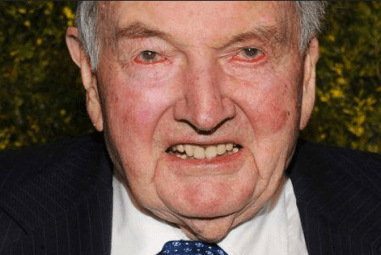 The question is all the more relevant, because his family, who have sponsored more medical and scientific research than perhaps any other American family, have funded investigations into genetics, longevity, social behavior, eugenics, chemotherapy and modern medicine that have defined breakthroughs.

For instance, a 1943 report from the Rockefeller Foundation discusses their involvement with “mining blood” for its qualities, both known and unknown:

“Thus, what started as an inquiry into the practicability of using animal plasma as a blood substitute for transfusion purposes, has developed into a program of “mining” blood for its individual substances and for testing these concentrates for therapeutic and prophylactic use.

The Rockefeller Foundation and just a few other key foundations have dominated the restructuring of scientific research, and the funding and direction of research and development.

More quietly, they have also been responsible for suppressing many cures and breakthroughs that did not meet their agenda. Those fruits have been enjoyed behind the veil, if at all.

A contributor on Natural News, raptorman, dug up some very damning research that was being conducted in 1957 and sponsored by the foundation:

Parabiosis refers to the transfusing of blood from one subject to another literally combining the circulatory systems of two animals. Some scientific studies have shown reported health and longevity benefits to older mice if paired with younger mice. This came into the mainstream view with headlines about tech billionaires injecting young people’s blood for life extension…  Many articles detail the very wealthy’s interest in the process of transfusing the blood of the young for its rejuvenating properties.

Any of the recent articles on the subject are carbon copies of each other, all referencing the same report in the journal Nature. Mentioning only the same part of the report entitled Ageing Research: Blood to blood and not considering the deeper implications.

• In the past few years, however, a small number of labs have revived parabiosis, especially in the field of ageing research. By joining the circulatory system of an old mouse to that of a young mouse, scientists have produced some remarkable results. In the heart, brain, muscles and almost every other tissue examined, the blood of young mice seems to bring new life to ageing organs, making old mice stronger, smarter and healthier. It even makes their fur shinier. Now these labs have begun to identify the components of young blood that are responsible for these changes.

Raptorman draws the connection back to experiment work, sponsored by the Rockefeller Foundation and the secretive Office of Naval Research:

How young is the blood needed for the effects? How is this blood obtained?

About the first question, again quoting from the same article in the journal Nature just a few paragraphs down.   This part was conveniently left out of the mainstream pieces.

• Clive McCay, a biochemist and gerontologist at Cornell University in Ithaca, New York, was the first to apply parabiosis to the study of ageing. In 1956, his team joined 69 pairs of rats, almost all of differing ages3. The linked rats included a 1.5-month-old paired with a 16-month-old — the equivalent of pairing a 5-year-old human with a 47-year-old. It was not a pretty experiment.

The very young were paired with the old. Not sort of young like an 18-year-old, really young like a 5-year-old!! With humans pairing the equivalent of an 18-year-old with a 47-year-old might be acceptable. Whereas pairing a 47-year-old with a 5-year-old is definitely not. All of this is certainly not good for the young host as it is sucked dry of its vitality. The younger the host the more vitality there is to be had.

In McCay’s first parabiotic ageing experiment, after old and young rats were joined for 9–18 months, the older animals’ bones became similar in weight and density to the bones of their younger counterparts…

Indeed, the Rockefeller Foundation has been funding his research in aging since 1936, and continuously over the course of his career: 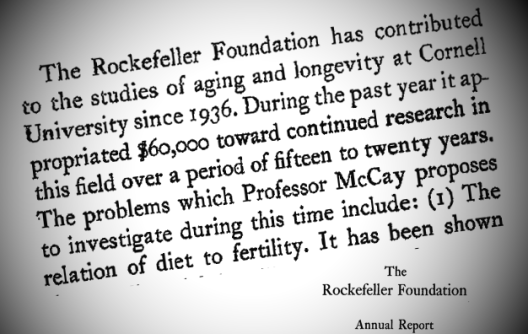 If anyone would embody the spirit and behavior of vampires, by sucking off the vitality of the young and naive, it would certainly be the very same elite who’ve lied to us as a means of keeping us all controlled.

Wars, conflicts, terrorism, news of death and destruction, and a focus on sports, entertainment and consumer culture have kept us all inside the bounds.

Maybe it goes one step further, and we’re being fed off like cattle?

Is that question really too big to raise?

Elite Prepare to Hole Up in Luxury Underground Bunkers: “They Know Something The Rest of Us Do Not”

‘We Live In a Cesspool of Entitled, Elite Scumbags’

Why We Always Get Screwed: Calculations Show “Society Too Complex to Have A President”

The Establishment Is Preparing For Martial Law And Civil War: “Trump’s Pursuit Of Presidency Will Be The Spark”

This article was posted in babies, blood, Conspiracy Fact and Theory, foundation, Headline News, infant, platelet, research, rockefeller, science, Youth and tagged Conspiracy. Bookmark the permalink. Follow comments with the RSS feed for this post.Comments are closed, but you can leave a trackback: Trackback URL.