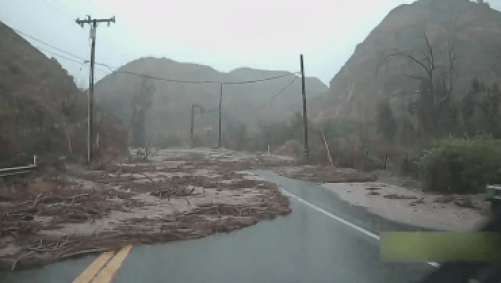 Severe flooding hit the West Coast, and drivers everywhere were caught in life-threatening flash floods. The loss of life and property damage are already significant.

What would you do if caught driving in flash flood conditions, and rising water was headed for your vehicle?

Mark Chagaris uploaded video to YouTube of the terrifying flash flood – and while it’s unclear if he was the driver who captured the chilling scene on the dashboard cam – what is clear is that the surge of water was definitely dangerous.

The canny driver manages to reverse course and back quickly away from the muddy surge, which flush wave after wave of water over the road as his windshield wipers go full blast.

‘Mother Nature Speaks Loudly’ Chagaris captioned the video, which has so far received almost 250,000 views. This year’s California El Niño is so intense that it’s been nicknamed ‘Darth Niño.’

This man got away without incident after facing an epic force of nature. And thanks to his dash cam, he captured video of it while driving north of Los Angeles.

After waters rushed over the highway, he man backed up, reversing course down the road as the flood threatened to subsume his vehicle, before turning around and heading for higher ground…

Evacuations and orders to move to higher ground are driving the temporary relocation of thousands of people, and the episodes of flooding could take place in other places as well. As

Some 3,000 people in Sonoma County are under evacuation orders, and at least seven homes are seriously damaged.

In the town of San Anselmo, police ordered people out of the downtown area because of rising flood waters, telling them to either evacuate or move to higher floors. A mudslide pushed a tree into a house in the town of Fairfax, California, trapping four people including two children. (source)

Unfortunately, an uptick of extreme weather has put millions of people, particularly in coastal urban areas at risk of encounter with flooded waterways or property damage in homes and buildings.

If you are caught in flooding, or compelled to evacuate in your vehicle during an emergency and must pass through or near flooded roads, keep in mind the overwhelming force that this water holds when up against any vehicle. Crossings that appear safe enough could end up sweeping a driver away to his death. Hundreds of people die this way in the average year.

As Tess Pennington notes, you must keep these factors remember during a flash flood:

The following are important points to remember when driving in flood conditions:

Six inches of water will reach the bottom of most passenger cars causing loss of control and possible stalling.
A foot of water will float many vehicles.
Two feet of rushing water can carry away most vehicles including sport utility vehicles (SUV’s) and pick-ups.

In the event that you end up stranded, unable to cross over a necessary roadway, or you crash into an embankment without knowing when help will arrive, it would be prudent to keep some basic supplies in a 72-hour kit, etc. to help keep you sustained if conditions put you in a bad spot.

Additionally, supplies to deal with getting out of your car – busting windows, cutting seatbelt straps, flares and radios to signal for help and other items could be invaluable if you are trapped in a car during a flodo, or disabled by a crash.

Your car kit should see you through at least 48 hours.  Do you have enough water and food that doesn’t require cooking to get your family through an event like this? Do you have a way to keep small children entertained? Go here to see what I keep in my car kit. Yes, it’s extensive, but in a situation like this one, we could last for days without waiting for a helicopter to drop supplies to us.

Whenever possible, evacuate before things get this bad.  Timing is everything when it comes to an evacuation. If you get out early, you won’t get stuck in traffic and are less likely to encounter insurmountable hazards. Of course, you can’t always make it out ahead of the crowd, especially in a situation with conditions that strike suddenly, like wildfire (check out the videos here to see how fast it can happen) or flash floods.

Keep your gas tank above 3/4 full.  If you get stranded, you may need to run your vehicle for warmth, to keep the cell phone battery charged, and to listen to news updates. You’ll be glad you kept the tank topped up.

If you were stranded in your car, would you have to wait for supplies to be dropped?

Other videos from California show the high water levels and dangerous flooding conditions:

River campgrounds and cabins at Big Sur under water as river rages through #CAstorm #CAflood pic.twitter.com/jV1gxcMlIb

A few days ago this was a creek kids could stand in to play around in. The rain is nuts. pic.twitter.com/hMjJL3fsk5

Floods? Watch This Prepper Save His Home From Encroaching Water

Could You Escape Your Vehicle In a Disaster? “The Potential Is All Too Real”

Are You “Ready to Be Stranded” On the Road?

This article was posted in California, Conspiracy Fact and Theory, emergency, Emergency Preparedness, flash flooding, flooding, Headline News, natural disaster, sequoias, SHTF, trees, weather and tagged disaster. Bookmark the permalink. Follow comments with the RSS feed for this post.Comments are closed, but you can leave a trackback: Trackback URL.