Experts Claim Earth’s Magnetic Poles Overdue To Flip: “Could Cause Chaos In Everything” 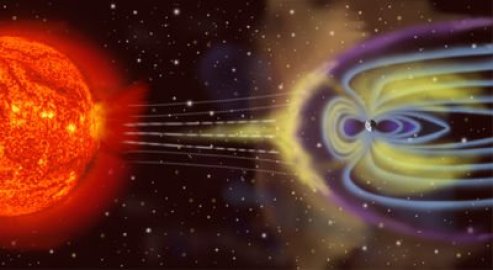 Scientists are only just beginning to comprehend the dramatic impact that magnetic fields have on our lives, and indeed all life on earth.

And now, they fear that the poles are rapidly shifting, and could indeed flip in our lifetimes. A state of constant change, and the potential for drastic shifts, has made airline travel, communications, the electric, satellites and other infrastructure incredibly vulnerable.

Some of the effects have already been experienced on a low level, and we should take heed of the warnings they give.

Eerily, the very forces of electromagnetism that are used in communications, physics and other branches of science are also integral to brain function, weather patterns – and importantly, the planet’s exposure to solar radiation. Any major disruptions or alterations in this fabric around earth could undo normalcy and trigger utter chaos and destruction.

The alteration in the magnetic field during a reversal will weaken its shielding effect, allowing heightened levels of radiation on and above the Earth’s surface.

Were this to happen today, the increase in charged particles reaching the Earth would result in increased risks for satellites, aviation, and ground-based electrical infrastructure.

Geomagnetic storms… give us a foretaste of what we can expect with a weakened magnetic shield.

In 2003, the so-called Halloween [solar] storm caused local electricity-grid blackouts in Sweden, required the rerouting of flights to avoid communication blackout and radiation risk, and disrupted satellites and communication systems.

But this storm was minor in comparison […] widespread blackouts could result in economic disruption measuring in tens of billions of dollars a day.

So when’s the next one happening and how will it affect life on Earth?

No one knows if we will see a “big one” type of solar event in our lifetime, but scientists definitely think it is possible, and the timing doesn’t seem to be fixed at all. Moreover, even lesser events could be making important alterations, and could be driving long term trends – whether detrimental or a complete disaster.

Reports have flooded in over the past decades of shifting poles, and problems for airplanes and navigation, as well as for GPS and satellite based communications.

The cracking of the ice in Antarctica, and the threats of global melt are also tied to this phenomenon – rather than the CO2 usage of mankind – and appear to be accelerating with important and potentially grave consequences.

The importance of the surrounding magnetic field cannot be overstated, but it is certainly far from being fully understood by science or the general public.

But without it, Earth could not sustain life on the planet. However, with its enveloping regulation of solar radiation and the effect of solar and space events, the inhabitants of Earth can enjoy the positive, life-giving benefits of the sun without being scalded and destroyed by its most harmful effects.

The delicate balance between the positive and negative aspects of the sun is thanks to the complicated and ever changing magnetic belts around our planet.

As the Daily Mail summarizes:

The Earth’s magnetic field surrounds our planet like an invisible force field – protecting life from harmful solar radiation by deflecting charged particles away.

Far from being constant, this field is continuously changing.

During a reversal the magnetic field won’t be zero, but will assume a weaker and more complex form.

It may fall to 10% of the present-day strength and have magnetic poles at the equator or even the simultaneous existence of multiple ‘north’ and ‘south’ magnetic poles.

However, the interval between reversals is very irregular and can range up to tens of millions of years.

There can also be temporary and incomplete reversals, known as events and excursions, in which the magnetic poles move away from the geographic poles – perhaps even crossing the equator – before returning back to their original locations.

Volcanoes, earthquakes, tsunamis and other seismic disruptions could take place and enact severe destruction upon the earth – and many scientists believe that this has all been tied to past extinction events on earth.

There are clearly some major disruptions taking place, but the question is, will we or could we live through the most dramatic parts of such a time?

More conspiratorial viewpoints additionally believe that the huge levels of electromagnetic energy being produced – and emitted – at the CERN Large Hadron Collider are also making significant contributions to the weakening of the magnetic field.

There may be a correlation between the artificial manipulation of these forces by man’s scientific endeavors that could affect us long before the roll of the dice of solar-magnetic events ever take place:

Science is aware that the global magnetic field is changing. It has weakened and astounding 10% or so since the 1800s, and the trend is continuing, and accelerating. CERN may be contributing to these changes and a depletion of our protective layer.

A weaker magnetic field (and even very weak magnetic fields) can have dramatic effects on human and animal behavior, and of course, weather patterns. Low frequency EMF forces, like those enveloping the planet are very closely associated with altered behavioral affects and brave wave entrainment.

Even our core beliefs can drift or be pulled, and have been experimentally modified by science – these changes are driven by, what else, magnets. However, many of these changes are so subtle, they could even be taking place right now, or gradually over time.

So things could get pretty weird, and pretty ugly, if there is any significant flux in the magnetic grid in our lifetime, and recent scientific findings suggest that it is all too possible, and perhaps imminent.

Of course, this would have a huge bearing on the power grid, which sustains life in modern society.

It is now well understood that grid down sets a very short time clock for total chaos and descent into madness.

Get your preps, and be very careful and calculating about your interactions with and dependence upon the modern grid, delivery and supply system, as well as your relative distance to population centers.

Everything we take for granted today can be undone in a span of time that may as well be nothing more than the blink of an eye.

A Step-By-Step Guide To Prepare For Any Disaster

EMP Threat: ‘Within One Year 9 Out of 10 Americans Would Be Dead’

EMP Attack “Could Bring Our Civilization to a Cold, Dark Halt”

EMP Attack Would Destroy Civilization: “A Nightmare You’ll Never Wake Up From”

This article was posted in Conspiracy Fact and Theory, electromagnetic, Emergency Preparedness, emf, event, Grid, Headline News, magnetic, prepper, SHTF, solar magnetic, warning and tagged civilization, solar. Bookmark the permalink. Follow comments with the RSS feed for this post.Comments are closed, but you can leave a trackback: Trackback URL.