THE BLOOD BATH CONTINUES IN THE U.S. MAJOR OIL INDUSTRY

By the SRSrocco Report,

The carnage continues in the U.S. major oil industry as they sink further and further in the RED.  The top three U.S. oil companies, whose profits were once the envy of the energy sector, are now forced to borrow money to pay dividends or capital expenditures.  The financial situation at ExxonMobil, Chevron and ConocoPhillips has become so dreadful, their total long-term debt surged 25% in just the past year.

Unfortunately, the majority of financial analysts at CNBC, Bloomberg or Fox Business have no clue just how bad the situation will become for the United States as its energy sector continues to disintegrate.  While the Federal Government could step in and bail out BIG OIL with printed money, they cannot print barrels of oil.

Watch closely as the Thermodynamic Oil Collapse will start to pick up speed over the next five years.

According to the most recently released financial reports, the top three U.S. oil companies combined net income was the worst ever.  The results can be seen in the chart below: 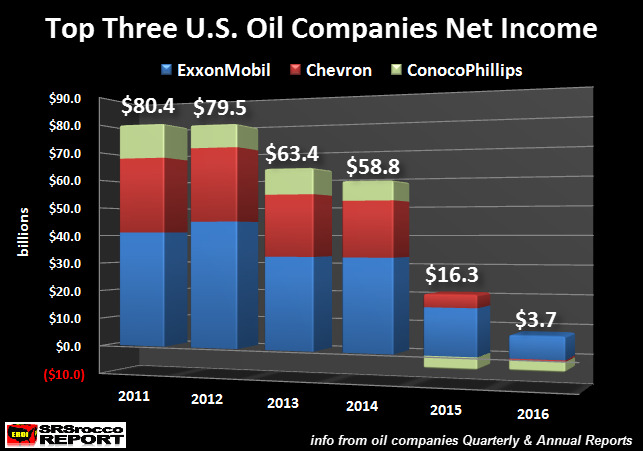 In 2011, ExxonMobil, Chevron and Conocophillips enjoyed a combined $80.4 billion in net income profits.  ExxonMobil recorded the highest net income of the group by posting a $41.1 billion gain, followed by Chevron at $26.9 billion, while ConocoPhillips came in third at $12.4 billion.

However, the rapidly falling oil price, since the latter part of 2014, totally gutted the profits at these top oil producers.  In just five short years, ExxonMobil’s net income declined to $7.8 billion, Chevron reported its first $460 million loss while ConocoPhillips shaved another $3.6 billion off its bottom line in 2016.  Thus, the combined net income of these three oil companies in 2016 totaled $3.7 billion versus $80.4 billion in 2011.

Even though these three oil companies posted a combined net income profit of $3.7 billion last year, their financial situation is much worse when we dig a little deeper.  We must remember, net income does not include capital expenditures (CAPEX) or dividend payouts.  If we look at these oil companies Free Cash Flow, they have been losing money for the past two years: 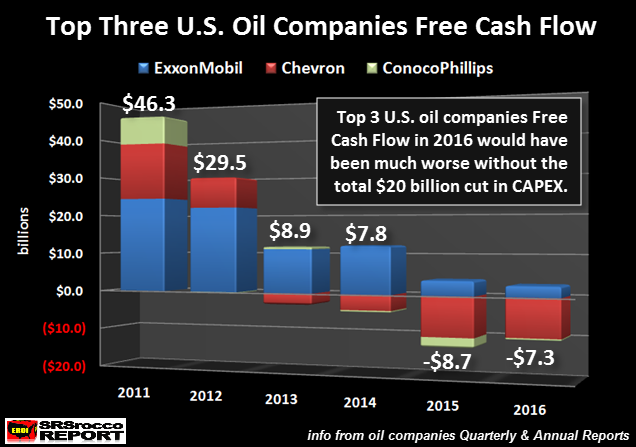 Even though these companies slashed nearly $20 billion in CAPEX spending in 2016, they still suffered a negative free cash flow of $7.3 billion.  However, this does not include dividend payouts to their shareholders.  Not only did these companies pay a total of $46.6 billion in CAPEX in 2016, they also forked out an additional $21.4 billion in shareholder dividends.  Dividend payouts do not come out of thin air.. they must come from cash from operations.

If we include dividend payouts, this would be the net result on these companies Free Cash Flow: 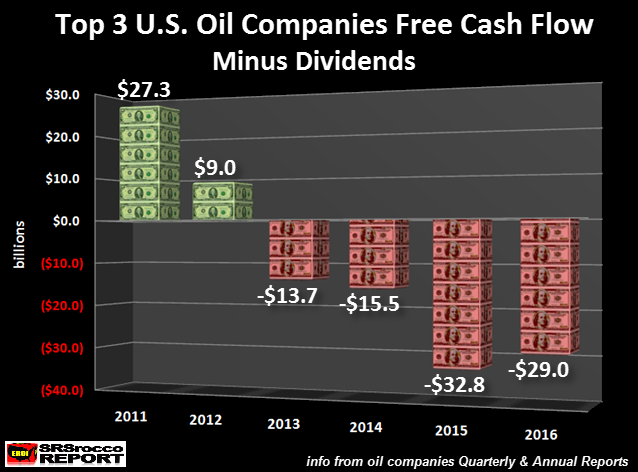 Here we can see that the large dividend payouts by these three oil companies impacted their bottom line much worse than the figures shown in the Free Cash Flow chart above.  Thus, the free cash flow minus dividend payouts provides us evidence that these oil companies have been seriously in the RED since 2013, not just the past two years displayed in the Free Cash Flow chart.

As we can see, the group’s free cash flow minus dividends was a negative $32.8 billion in 2015 and a negative $29 billion last year.  Of course, these three companies may have sold some financial investments or assets to reduce these negative values, but a company can’t stay in business for long by selling assets that it would need to use to produce oil in the future.

So, what has falling free cash flow and dividends done to ExxonMobil, Chevron and ConocoPhillips long-term debt?  You guessed it… it skyrocketed: 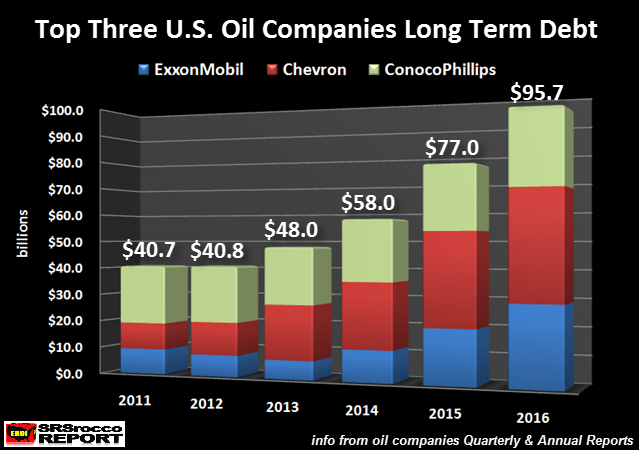 When these three companies still enjoyed positive free cash flow in 2011 and 2012, after paying CAPEX and dividends, their long-term debt did not increase.  However, as their operating profits really started to decline, the debt on their balance sheets increased significantly.  Thus, the combined long-term debt in these three companies balance sheets ballooned from $40.8 billion in 2012 to $95.7 billion in 2016.

Basically, these three companies combined long-term debt has doubled in just the past three years.  This is bad news as the situation in the energy markets continues to disintegrate.  Zerohedge published this article, Goldman Stunned By Collapse In Gasoline Demand: “This Would Require A US Recession” which stated the following:

So yes, both gasoline stocks and supply remains at extremely high levels, but what set off alarm bells is not supply, but demand: the EIA last week reported that the 4-week average of gasoline supplied – or implied gasoline demand – in the United States was 8.2 million barrels per day, the lowest since February 2012. And, as Reuters adds, U.S. refiners are now facing the prospects of weakening gasoline demand for the first time in five years.

Unfortunately, the massive amount of debt overhanging the U.S. economy has put a lot of leverage on the public’s ability to continue purchasing consumer goods and services.  While the market has become clever at selling cars for example, by first offering lower interest rates and extended loan payouts, it is now resorting to leasing vehicles at ultra low monthly payment plans… just to get rid of them.  Leasing automobiles at monthly rates that are uneconomic for the auto industry in the long run, only allows the GREATEST FINANCIAL PONZI SCHEME to continue a little longer.

When we start to add up all the data, the U.S. economy is getting ready to hit a BRICK WALL.  Furthermore, the situation at the top three U.S. oil companies will only get worse going forward.  As ExxonMobil, Chevron and ConocoPhillips continue to bleed to death, watch for U.S. oil production to fall precipitously in the future.

Yes, it is true that U.S. oil production has increased over the past several months due to the DRILLING RIG HAMSTERS doing their thing by taking good investment money and producing more crappy low quality oil.  However, this isn’t something to cheer about.  Rather, I call this…. turning GOLD into LEAD.

Some readers send me information of the growing drilling rig count and oil production in the Permian field in Texas.  Yes, that is where the activity has moved to.  Why?  Well, it is one of the last fields that can produce oil similar to the Bakken and Eagle Ford.

That being said, I would refrain from believing that this bump up in U.S. oil production will SAVE THE DAY.  Why?  Because it is being done on the back of a massively indebted energy sector which has been able to continue drilling by using rigs that have seen their rental rates cut in half, or more, due to the implosion of the drilling rig industry in 2015 and 2016.

The evidence provided in this article showing the continued financial disintegration at these top three oil companies suggests that the U.S. energy sector is in serious trouble.  We must remember, the top oil companies are supposed to be the most profitable.  However, if we take a look at what is taking place in the top shale oil and gas producers, the situation is even more dire.  I have republished this chart from a previous article showing that the shale oil and gas industry hasn’t really made a profit since 2009:

While some of the companies made free cash flow profits in various years, as an industry, these oil and gas producers have been in the RED since the U.S. Shale Energy Industry really took off in 2009.  So, the notion that rising oil production from increased drilling rig activity is going to change the SEA OF RED taking place in the entire U.S. energy sector, suggests individuals or the market has gone completely insane.

As I have stated before, Americans continue to suffer from an increasing amount of BRAIN DAMAGE.  Now, I am not just talking about the typical JOE BAG of DONUTS, as they at least have an excuse due to the propaganda put out by the Mainstream media.  However, I am really surprised that “supposedly” intelligent individuals continue to either believe in U.S. energy independence or the more silly “Abiotic oil” theory that the Earth has a CREAMY NOUGAT CENTER of oil… that will refill all the oil fields in the world.  (James Howard Kunstler gets the credit for that wonderful term).

While I realize the “Abiotic Oil Theory” is complete HOGWASH, many individuals still believe it is true.  This theory has been propagated by a few Russian scientists and engineers, but I can assure you the bulk of the Russian oil industry is not drilling down to ultra deep depths to get their oil.  I will be publishing an article shortly as a rebuttal to a recent newsletter post titled, How I came to Realize I was Wrong About Peak Oil – F. William Engdahl.  Unfortunately, Mr. Engdahl has failed to look at the real evidence, instead has fallen HOOK, LINE and SINKER by faulty information and lousy conspiracy theories.

The number of individuals who fail to believe in PEAK OIL will diminish greatly as the Thermodynamic Oil Collapse picks up speed over the next five years.  During this time, it would be prudent to own physical precious metals rather than highly inflated debt-based paper assets or real estate.

Check back for new articles and updates at the SRSrocco Report.