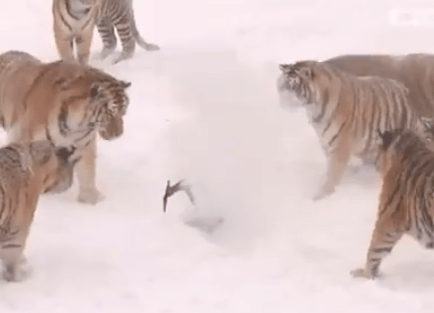 Ever wonder what nature thinks of all the strange creations of man?

As technologies take on a life of their own, animal life finds its own balance.

These Siberian tigers, held in captive in China zoo got pretty pissed off a surveillance drone that was capturing amazing footage of them running in an ambush formation.

After stalking the flying contraption, a lead tiger batted it down, and it was subsequently destroyed, until the tigers cause the device to go up in smoke, literally!

Incredible footage from a Siberian tiger enclosure in China’s Heilongjiang Province has captured the moment a drone was taken down and torn apart by a group of the wild cats.

The drone belonging to reporters from China Central Television (CCTV) fell victim to the animals as it was being used to film aerial footage of the tigers playing in the snow.

The curious big cats then gather around and inspect the gadget. They gnaw on it’s frame, perhaps annoyed it wasn’t edible, before chewing through the motor and releasing plumes of smoke.The bemused beasts then wisely back away, drone destruction complete.

Strange and fascinating. Pretty unprecedented footage, as new clashes appear in our world.

Don’t mess with these guys pic.twitter.com/YUgOWK8Q4F

Similarly, an eagle was caught on camera recently taking down a drone, with strategic use of its talons, just as it would any bird of prey.

The bird was not wild either, however, but being trained by a Dutch police unit to hunt and take down drones – as authorities take to atypical ways of controlling the use of this popular aircraft.

Meanwhile, here is one way that man is dealing with the unwanted invasion of drones, as SHTF previously reported: 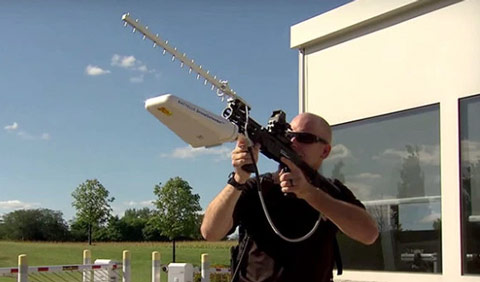 Mankind thinks it will replace nature and improve upon it, but in the long run, nature remains a formidable foe, as every prepper, survivalist, and realist knows.

Defeating Drones: How To Build A Thermal Evasion Suit *Video*

Town To Issue Licenses and Bounties To Shoot Down Drones: “They Fly In Town, They Get Shot Down”

This article was posted in Animal, caught on tape, drones, Entertainment, surveillance, tigers, video. Bookmark the permalink. Follow comments with the RSS feed for this post.Comments are closed, but you can leave a trackback: Trackback URL.