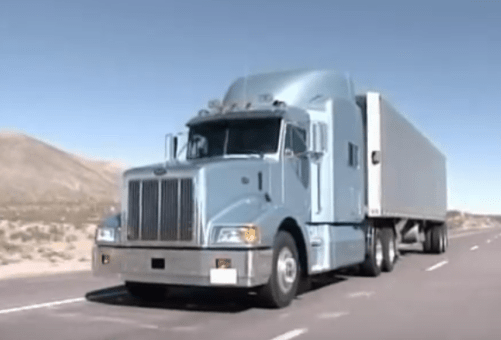 They are armed and ready to detonate from countless secure locations across the world.

But they still have to be transported there, and sometimes the U.S. government (and other governments) moves these around on civilian highways.

There’s a chance that you passed one of these unmarked vehicles, and never knew it.

But inside may have been weapons-grade plutonium, uranium, a nuclear bomb or other highly dangerous materials, passing by little detected, but carefully guarded by accompanying convoy vehicles filled with armed federal guards with authorization to use deadly fire.

Have you ever noticed an 18-wheeler rolling along with no markings? If you do, give it some space, you might be surprised what that semi is carrying.

The mission of the Office of Secure Transportation is to safely transport nuclear bombs, nuclear bomb components, and other nuclear materials like plutonium and uranium across America in the back of unmarked 18-wheelers. Yes, it’s true, that non-descript big rig you see running down the road could have a nuclear bomb in the back. That will make you think twice before cutting off one these massive trucks.

Disclosed materials and statements from government agencies indicate that there are dozens of these convoys on the roads at any given time, and that they have logged over 3 million miles since 1947. Claiming that the missions are safe, they ominously boasts:

“For more than 40 years — even after driving the equivalent distance of a trip to Mars and back — no cargo has ever been damaged in transit,” it said.

However, many consider the ongoing practice to be the “Achilles Heel” of U.S. defense – a system that remains wide open to terror attack, ambush by an adversary, vulnerability during an evacuation from an urban area, and the larger element of chance and accident – though the unmarked tractor trailers are supposedly reinforced and secure against bomb explosions during all scenarios of traffic accidents and fires.

And accidents do happen, as this short video of a military convoy rear-ending a nuclear 18-wheeler makes clear:

These dangerous movements are expected to increase during current efforts to increase military activity and upgrade capabilities and facilities.

According to the L.A. Times:

“Transportation is the Achilles’ heel of nuclear security and everyone knows that,” said Bruce Blair, a retired Air Force missile officer, Princeton University researcher and founder of Global Zero, a nonprofit group that seeks elimination of nuclear weapons

The result is an unwieldy system that requires some of the most dangerous and vulnerable components of the nation’s defense system to be routinely shipped on long-distance journeys from one end of the country to the other — and the shipments, with the coming modernization effort, are only expected to multiply.

“This has a classic footprint of an antiquated and inefficient supply chain management system that was created at a time of national emergency,” said Nick Vyas, an industrial logistics expert at USC.

Although these trailers are considered vulnerable targets, and there is concern that something could go wrong, or that an attack could be imminent, it is definitely worth pointing out that these are not your typical 18-wheeler trailers carrying groceries.

They are as sophisticated and reinforced as any gadget in a Bond film ever was. In short, any unauthorized individual who attempts to meddle with or compromise these vehicles will likely be killed – just after the deadly surprise of their life:

The high-security trailers that carry the weapons present potential intruders with formidable obstacles, including shock-delivering systems, thick walls that ooze immobilizing foam, and axles designed to explode to prevent a trailer from being towed away, according to independent nuclear weapons experts.

“The trucks will kill you,” a scientist involved in the matter said.

It sounds like something out of Indiana Jones, but instead it’s on the highways.

It is an open secret that even the U.S. government’s little-known Office of Secure Transportation agency, under the National Nuclear Security Administration (NNSA).

Over the years, nuclear weapons have been dropped from planes by accident, gone missing at highly secure, top secret U.S. military bases, and much has been done in secret.

Perhaps it is a wonder that things have gone as smoothly as they have.

A Step-By-Step Guide To Prepare For Any Disaster

This article was posted in arms, base, Conspiracy Fact and Theory, Emergency Preparedness, hidden, militarized, secret and tagged government, nuclear. Bookmark the permalink. Follow comments with the RSS feed for this post.Comments are closed, but you can leave a trackback: Trackback URL.