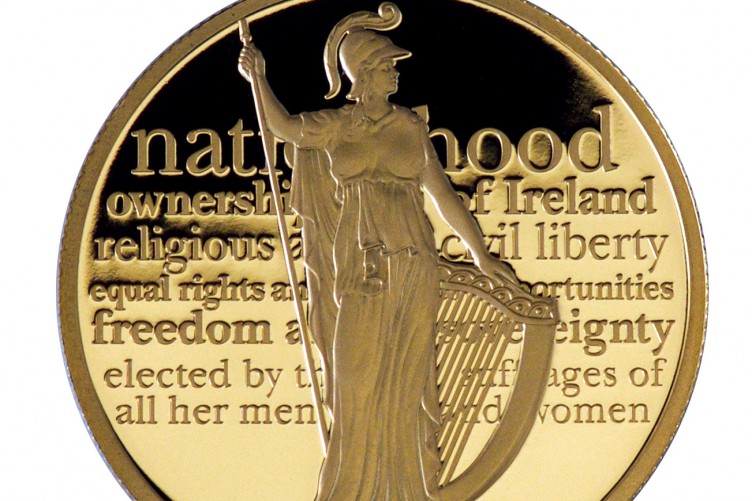 In an unprecedented move the Irish government is issuing and dispatching a free gold coin to all Irish citizens and foreign persons of Irish heritage.

In a controversial move, the Ministry of Finance plans for Irish people to own at least 1 ounce of gold bullion. The Irish Finance Minister said the “little people” were exposed due to the many risks that Brexit poses to Irish companies and the Irish economy and indeed the risks posed to the EU and the euro itself.

Irish politicians on the left have criticised the move as being “too generous.” They said that wealthy Irish Americans should not benefit from the move given that there is a homeless crisis in Ireland and given that the state was still close to bankruptcy.

Speaking on condition of anonymity the Irish Finance Minster Mr D. O’Gill stated in his Constituency office of Donaghue’s Bar on Baggot Street:

“Sure if the Brits leave us alone to fight the mad Germans and French Looney’ in Europe, sure we will be awful trouble and it won’t belong before the whole Euro project goes up in flames, a bit of gold in the hand will do wonders to calm nerves and keep the party going”.

All Irish people and those who claim Irish descent should register at the local Irish consulate. The Irish Embassy in Washington is expecting significant interest and Irish Americans began queuing the Embassy last night.

Seamus McSeamus, the preeminent personal finance journalist of his times said that the move was “financial lunacy” and that “sure don’t the dogs in the street know that gold is just a silly pet rock and a yellow metal of no value whatsoever. Gold is a volatile, high risk, barbaric relic that has no intrinsic value and should be consigned to the dustbin of history …  you cannot even eat gold … or euros or dollars … Gold is the root of all evil” he wrote in a recent op-ed.Firebrand, populist Irish politician, Paddy ‘On the Money’ Murphy, has been the driving force behind the ‘Free Gold in Ireland’ campaign. Something of an Irish Nigel Farage – indeed some have said he is something of the beautiful child of a Farage and Le Pens – he has stocked nationalist fires in the campaign:

“The Evil English have their bloody Gold Sovereigns and ‘Rule Britannia’ gold coins and they have protected their wealth from devaluation of the pound over the years. We have nothing but debased base metal coinage and Mario Draghi’s debased euro currency … Its time to take the monetary power back …”

he shouted to roaring crowds at a recent “Free Gold” rally.

It is about time us Pixies in magical mystical Ireland had our own gold coins – magical, lucky coins – so that us Irish can reclaim our national patrimony and our ‘Crock of gold’ at the end of the EU rainbow.