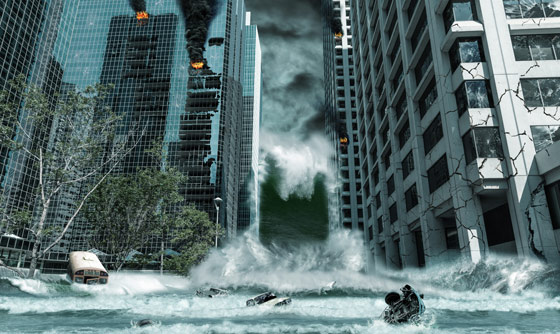 Whenever seismic activity kicks up on the planet, earthquakes, volcanoes and tsunamis are triggered.

Just how big, and how devastating, depends upon chance, and the build-up of pressures within the earth.

But anyway you slice it, places like Southern California, and globally, the Ring of Fire, are in the danger zone. Many say that it’s just a matter of time.

With that in mind, survival-minded individuals and disaster preppers have been trying to get ready, and help others get ready, too.

That’s sort of what happened when Chris Robinson and his Silicon Valley friends and associates got into ‘sketching ideas for tsunami-proof shelters.’

He says his boss drove home the idea, and brought it up over and over, until he came up with any idea…

… And started building his own tsunami-proof shelter that he hoped could survive a storm of any size, and keep he and his family safe even if the vessel tumbled, or got knocked.

As a one-man crew, Robinson went to town with simple plywood, and a lot of patience, until he came up with this fantastic DIY survival vessel, dubbed the ‘Tsunamiball’, featured on one of the best off-grid sites on the web.

A couple years ago Chris Robinson was a former Facebook and PayPal art director with no boat-building (nor sailing) experience. Then the Tsunami hit Japan (a place where he’d lived and met his wife). He happened to be working in a startup incubator at the time with some “very smart people”, including an astronaut, and everyone was sketching ideas for tsunami-proof shelters.

To be sure, Robinson’s house boat isn’t done, and frankly, wouldn’t survive a disaster of any magnitude in its current condition. It hasn’t even been tested on the water.

But he hopes to use his pet project to inspire others into thinking of better designs, and improving his along the way.

The former Facebook and PayPal art director used Adobe Illustrator to sketch his tsunamiball plan (he asked some engineers for help calculating whether it would float). “Very early in the project it became about building this interesting object,” Robinson says. “I’m not a survivalist. I don’t even have life jackets.” He does, however, have an emotional connection to Fukushima—he met his wife there in 1991, when he lived in Japan. “Half the places we went on dates are gone,” he says. Robinson plans to finish the outer shell by May, then ocean-test the vessel if he can find a crane and truck big enough to haul it over to the Pacific. And if the sphere doesn’t sink, he’ll use Airbnb to rent the tsunamiball for tidal wave-safe overnights in Palo Alto.

Whether it helps out in a disaster or not, the project is fascinating and breathtaking.

In principle, it is very similar to the ‘Survival Capsule’ that SHTF reported on a little while back:

In the wake of an extreme threat – such as a tsunami or earthquake – this capsule could be the best place to withstand the impact, no matter what.

It is water-tight. It is extremely durable. It floats, and it can withstand against the impact of super-strong winds, crashes, heat and many other factors.

As the London Guardian reports:

This capsule, which features two small porthole windows so the occupants can see what is going on around them, was created to give individual groups and families more control of their survival in emergency situation than traditional ‘safe houses.’

It is designed to float so it will never be inundated by water levels rising too high, as they do in tsunami situations.

The sphere is designed to withstand the initial impact of a natural disaster, as well as sharp object penetration, heat exposure, blunt object impact, and rapid deceleration.

How’s your plan for survival? It’s time to think one through if you don’t have one.

This Survival Capsule Could Insulate You Against Any Disaster: “More Control Than Safe Houses”

The Prepper’s Blueprint: Your Step-by-Step Guide to Survive Any Disaster

The Ultimate Prepper Bug Out Home

Are Devastating Tsunamis Headed for American Cities? “There’s Enough of a Chance”

This article was posted in Conspiracy Fact and Theory, diy, Earthquake, emergency, Emergency Preparedness, handmade, Headline News, off-grid, prepping, shelter, SHTF, survival, Tsunami, tsunamiball and tagged disaster. Bookmark the permalink. Follow comments with the RSS feed for this post.Comments are closed, but you can leave a trackback: Trackback URL.