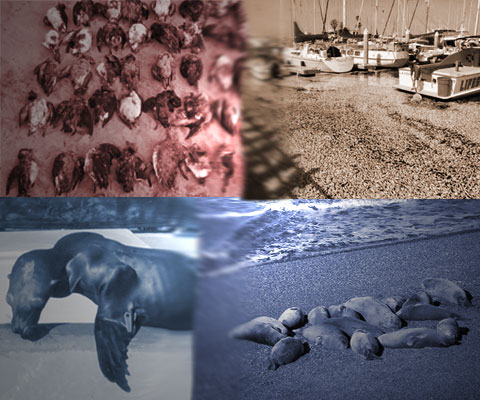 Editor’s Comment: There are forces at work manipulating the weather, attempting to mitigate climate change and otherwise attempting to terraform the earth. Every poison imaginable, and developed in a lab, has been unleashed through various agricultural uses, experiments and veterinary treatments. Bird flu, swine flu, and mutated strains of the seasonal flu are not only affecting humans; generally they have killed large groups of animals before making human populations sick. Fukushima remains a shadow over our lives, and the lives of the creatures in the oceans. There are many questionable activities going on besides – but the full truth is that no one individual can grasp the totality of what is being attempted and carried out on a planetary scale. Too much of what is going on remains classified, and obscured by benign cover stories and PR in the media.

But the planet-wide system is being interrupted and altered. Believe it or not.

Meanwhile, the inhabitants of the planet will pay a huge price for these activities. No one in the media or positions of authority has the courage to tell the truth or connect the dots about the mass die offs – about what it is that makes birds fall out of the sky in mass, whales to beach in mass, and seals, crustaceans, pigs, or horses drop dead without any reasonable explanation. And if the animals are dropping dead, is there reason for concern that humans are next? What is really going on?

It has been called “the long extinction”.  Our planet is in the process of dying, and as you will see below, this process of death and destruction appears to be accelerating.  According to a report that was put out by the World Wildlife Fund and the Zoological Society of London, the number of wild animals around the globe appears to be decreasing at a rate of about 2 percent a year.  2 percent may not sound like a lot to you, but over 10 years that would mean that 20 percent of all wild animals in the world would be gone.  And according to that same report, it is being projected that the total loss of wildlife during the 50 year period from 1970 to 2020 will be a staggering 67 percent…

The number of wild animals living on Earth is set to fall by two-thirds by 2020, according to a new report, part of a mass extinction that is destroying the natural world upon which humanity depends.

The analysis, the most comprehensive to date, indicates that animal populations plummeted by 58% between 1970 and 2012, with losses on track to reach 67% by 2020. Researchers from WWF and the Zoological Society of London compiled the report from scientific data and found that the destruction of wild habitats, hunting and pollution were to blame.

In other words, we are watching a global slow-motion extinction event which will ultimately claim hundreds, if not thousands, of species.

And as I mentioned above, this slow-motion extinction event appears to be accelerating.

In recent years, mass die-off events have been popping up in the headlines with startling regularity.  Fish, birds and animals are dying off all over the planet in absolutely frightening numbers.  One website that tracks these things says that there have been 152 mass death events in 48 different countries so far this year.

When something happens on the other side of the world, most Americans don’t seem to care very much, so let me share with you just a couple of examples of this phenomenon from inside the United States.  This first example comes from Atlanta…

Someone, or something, is killing thousands of birds in Atlanta. Since spring, the death toll began rising every week.

For Atlanta office workers, the dead birds are a sad sight at their doorstep. Now, Audubon Society volunteers are tracking and finding the dead or dying birds, many of them in Sandy Springs, Dunwoody and Buckhead.

If the death of thousands of birds in Atlanta does not get your attention, perhaps the death of millions of fish on the west coast will.  The following comes from Natural News…

As the salmon are dying by the millions, the government issued an emergency order along the western U.S. coast to cancel the spring king, or Chinook, salmon fishing activities. According to the California Department of Fish and Wildlife, salmon runs have dropped to record levels. Experts predict that the return of spawning Chinook salmon to the Klamath River will hit its lowest point ever this fall. It will be a huge challenge and difficult year for ocean salmon fishermen, especially in Oregon and California, reported the Council Chair Herb Pollard.

“We’ve been in a period of low productivity, not just on the Taku, but on several rivers up and down the coast,” said Juneau Area Management Biologist Daniel Teske, who expects a second-straight year of record-low salmon returning to their birthplace. Teske added that he is almost certain that the increased die-off must be happening in the ocean since all four rivers are being affected by low returns of the Southeast king salmon.

Of course the cold, hard reality of the matter is that everything around us is in the process of dying and deteriorating, and this even includes the human race.

If you don’t believe this, you may want to consider research from Cambridge University that found that human bodies are “significantly smaller” than they were thousands of years ago and that human brains are also smaller than they once were…

An earlier study by Cambridge University found that mankind is shrinking in size significantly.

Experts say humans are past their peak and that modern-day people are 10 percent smaller and shorter than their hunter-gatherer ancestors.

And if that’s not depressing enough, our brains are also smaller.

The findings reverse perceived wisdom that humans have grown taller and larger, a belief which has grown from data on more recent physical development.

On top of all that, scientists have known for a very long time that the human race is heading for an inevitable “mutational meltdown”.  The following is an excerpt from a study that was originally published by Gerald H. McKibben and Everett C. McKibben…

Geneticists have long worried about the impact of mutations on the human population, and that at a rate of one deleterious mutation per person per generation, genetic deterioration would result. Earlier reports were based on estimates of mutation rates considerable lower than what we now know to be the case. Findings going back to 2002 show that the human mutation rate is at least 100 mistakes (misspellings) per person per generation. Some scientists believe the rate is closer to 300.

Even a rate of 100 has profound implications, and the mutation rate is itself increasing. Furthermore, most, if not all, mutations in the human genome must be deleterious.  “And nothing can reverse the damage that has been done during our own generation, even if further mutations could be stopped.”  It would appear that the process is an irreversible downward spiral that will end in “mutational meltdown”.

If you didn’t grasp all of that, let me break it down for you very simply.

The human race is on borrowed time, and at some point our DNA will be so full of harmful mutations that we will no longer be able to continue.

If all of what I have just shared was not enough, scientists have also discovered that the entire universe is actually in the process of dying.  The following comes from CNN…

The conclusion of a new astronomical study pulls no punches on this. “The Universe is slowly dying,” it reads.

Astronomers have believed as much for years, but the new findings establish the cosmos’ decline with unprecedented precision.

The experts that conducted this study found that the universe is only producing about half as much energy as it once did.  As the amount of energy continues to decline, all of the lights will slowly go out until none are left.  Or as one scientist put it, the universe “is about to nod off for an eternal doze”…

“The universe has basically sat down on the sofa, pulled up a blanket and is about to nod off for an eternal doze,” said astronomer Simon Driver, who led the team.

We can certainly do some things to try to prevent the mass animal extinctions that are happening all over the planet, but nothing that we can do can stop the deterioration of human DNA or the slow death of the entire universe.

Hopefully what I have shared here will help many to understand that everything around us is just temporary.  Our world and everything in it will pass away, and perhaps we should spend the little time that we do have on this planet focusing on the things that really matter.

This article was posted in aftermath, Animals, chemical, Conspiracy Fact and Theory, dead birds, electromagnetic, emf, mass die off, Pollution, toxic, unexplained, wildlife. Bookmark the permalink. Follow comments with the RSS feed for this post.Comments are closed, but you can leave a trackback: Trackback URL.