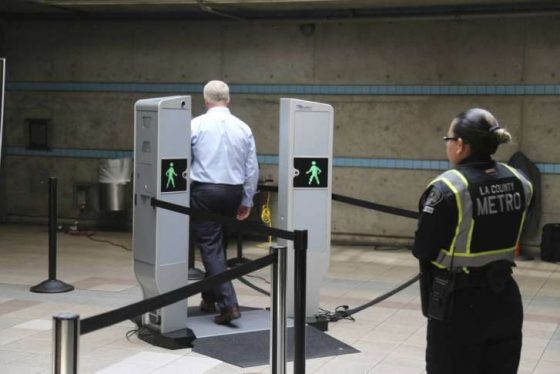 Once again it appears that airports are a test bed for nearly everything that will eventually trickle out into the general public. Whether it’s TSA VIPR teams on trains, or the emergence of biometric ID, the continuous reinforcement of an imminent and pervasive threat has people scrambling to give up their freedom for their ever-elusive security.

Although airport body scanners have been much maligned for their negative health effects from millimeter wave technology, as well as their thoroughly intimate invasion of privacy, it’s not stopping Los Angeles from rolling out a pilot program of the $60,000-per-unit scanners which began on Wednesday. Subway officials aim to process up to 600 people per hour in the (currently) voluntary screening:

The machines use sensors to scan a person as they walk through, searching for firearms and explosive compounds, said Dave Sotero, a Metro spokesman. Passengers don’t need to unload laptops or take off their jackets or shoes as the radio waves scan them to detect anomalies.

“It is specifically designed to test for mass-casualty threats,” Sotero said. “The technology enables the system to locate on the body where there is a potential threat, and it appears on a video screen.”

This article was posted in Bill Gates, LA METRO and tagged explosive compounds, Uncategorized. Bookmark the permalink. Follow comments with the RSS feed for this post.Comments are closed, but you can leave a trackback: Trackback URL.