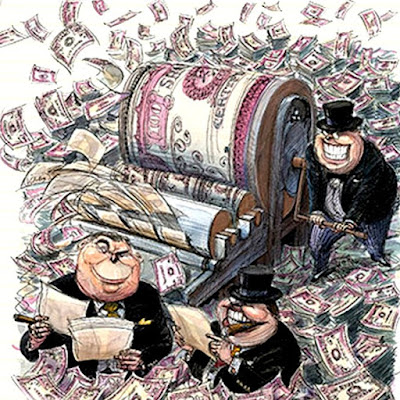 “The conventional wisdom seems to be that the problems of the euro zone are, as economist Martin Feldstein once put it, ‘the inevitable consequence of imposing a single currency on a very heterogeneous group of countries.’

What this commentary gets wrong, however, is that single currencies are never the product of debates about optimal economic solutions. Instead, currencies like the U.S. dollar itself are the result of political battles, where motivated actors try to centralize power.

This has most often occurred ‘through iron and blood,’ as Otto van Bismarck, the unifier of Germany put it, as a result of catastrophic wars. Smaller geographic units were brought together to build the modern nation state, with a unified fiscal system, a common national language that was often imposed by force, a unified legal system, and, a single currency. Put differently, war makes the state, and the state makes the currency….

European leaders weren’t stupid or self indulgent when they decided to move ahead with the euro, without fiscal union or strong Europe-level democracy. They just cared more about politics and international security than economics. They wanted to build a Europe that had transcended the divisions of the Cold War, and bind together Germany, which was reunited and much more powerful, with the rest of Europe.”

Kathleen McNamara, This is what economists don’t understand about the euro crisis – or the U.S. dollar

“Another cause of today’s instability is that we now have a society in America, Europe and much of the world which is totally dominated by the two elements of sovereignty that are not included in the state structure: control of credit and banking, and the corporation.

The post Stocks and Precious Metals Charts – On the Daedalian Wings of Paper Money and Corrupted Power appeared first on Silver For The People.

This article was posted in Germany, Precious Metals, stocks, U.S. Dollar and tagged Uncategorized. Bookmark the permalink. Follow comments with the RSS feed for this post.Comments are closed, but you can leave a trackback: Trackback URL.