One Trader Warns Of “The True Danger Ahead”

Authored by Kevin Muir via The Macro Tourist,

It’s easy for me to sit back and take pot shots at the hedge fund gurus calling for a repeat of the 2008 crash. Spouting words about markets never repeating the previous crisis is kind of cheap. If I am so sure history won’t repeat, why don’t I offer an alternative theory?

Well, at the risk of embarrassing myself, here it goes.

The biggest risk out there is not credit. It is not the monster short VIX speculative position. It is not CDX leverage.

The true DANGER AHEAD lies in the universal belief that treasuries (and other sovereign fixed income) offer a perfect hedge versus risk assets. 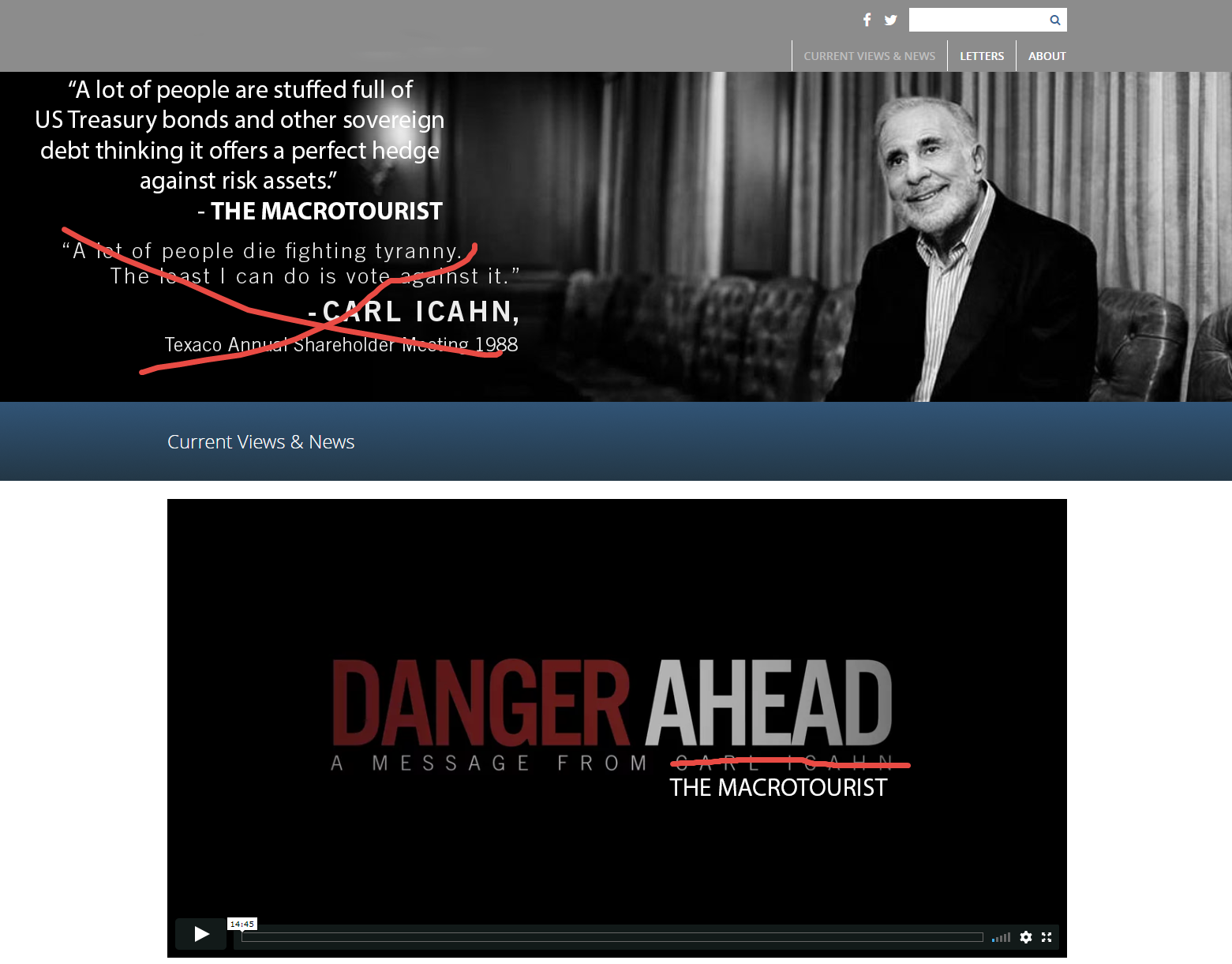 The other day I was listening to an interview with an insightful, smart, engaging value stock manager. He went through his stock selection process, named a few down and out value plays, and in the final moments of the interview, said something that nearly caused me to spit out my coffee. I am paraphrasing here, but the gist of his argument was that the only “free arbitrage” left in the markets was the near perfect negative correlation that US treasuries offered against a portfolio of risk assets. Buying a low yielding, highly leveraged sovereign bond is usually the anathema of value investors. And I don’t mean to pick on this manager as he is by no means alone. This belief is almost universally heralded as sacred.

And it’s easy to see why. Adding US treasuries to a portfolio has been an astounding diversifier, with zero cost as long-run volatility adjusted returns have been nothing short of incredible over the past couple of decades.

Here is the chart of the 10-year US t-note future continuously rolled. This chart represents the total return earned by going long 10-year note futures and diligently rolling them each quarter. 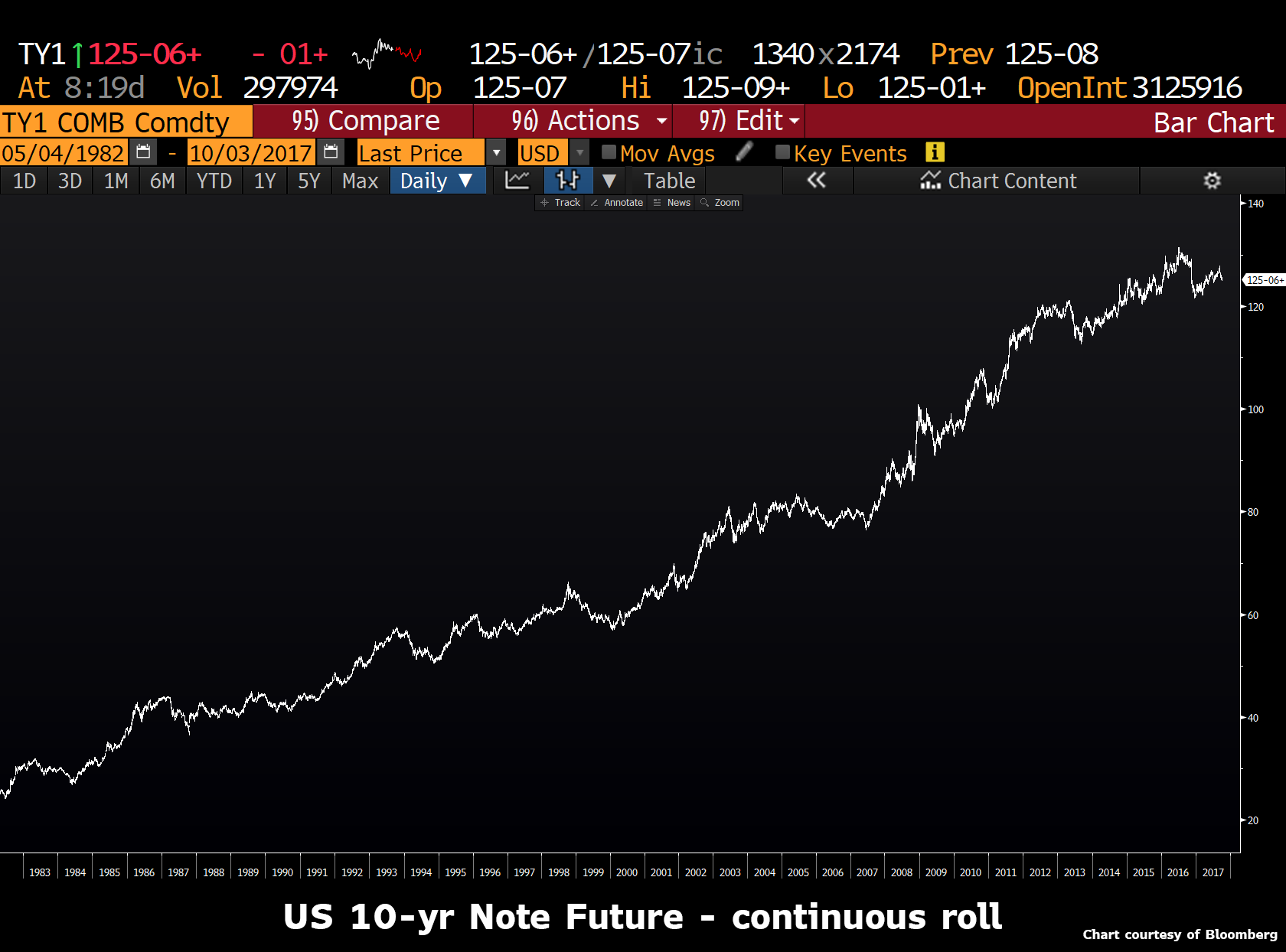 And here is the best part of the returns of this asset class. Not only is it a great risk adjusted long on its own, but since 1997 it has largely been negatively correlated to equities. 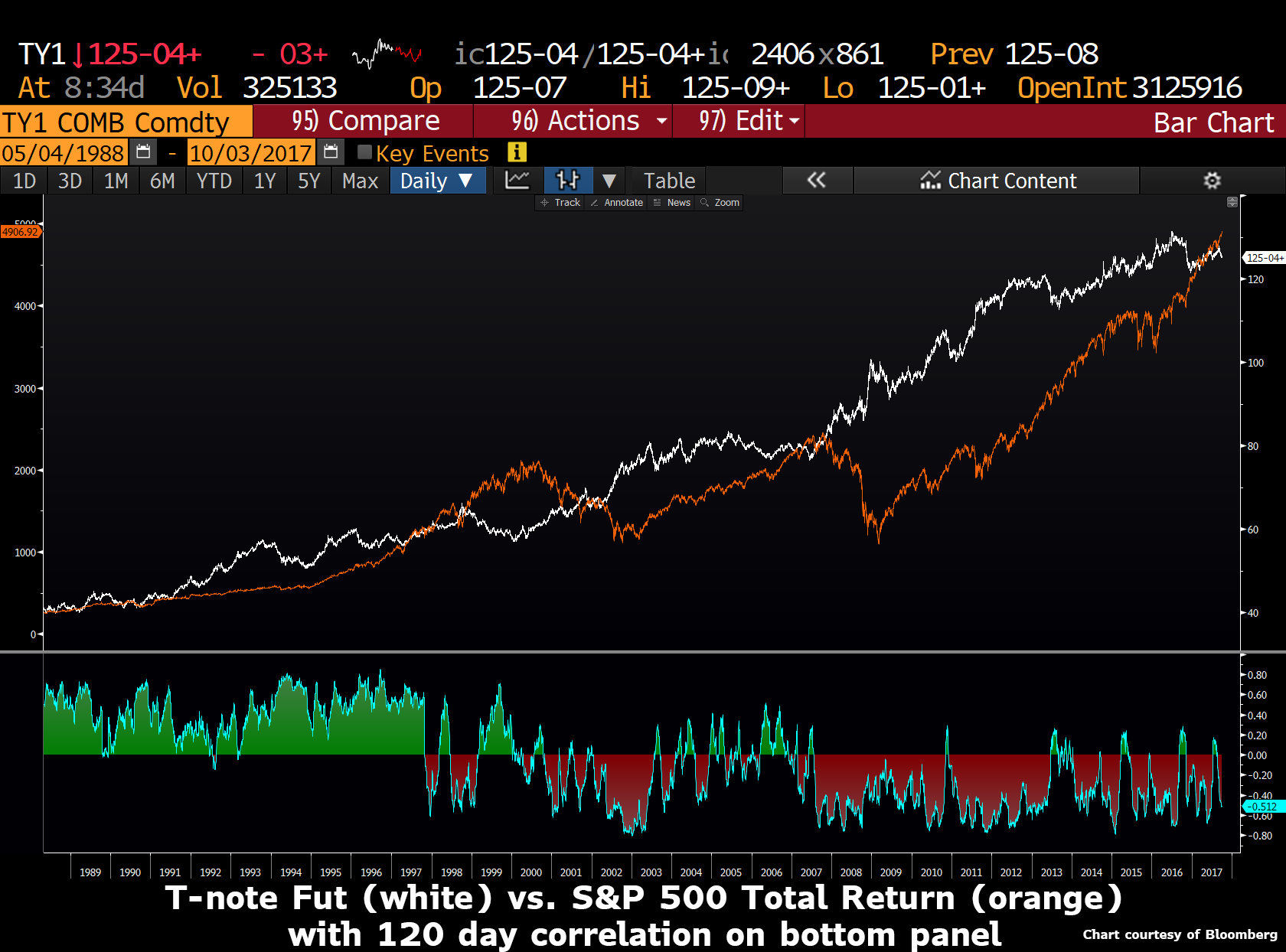 Risk parity managers like Ray Dalio made fortunes levering up bonds and adding them to a portfolio of risk assets, riding the wave higher in both equities and bonds, while enjoying less volatile returns through the diversification of two negatively correlated assets (see “Axe would hate risk parity”). And I am not dissing this trade. It’s been genius. But I wonder if Ray Dalio’s retirement was equally smart. Could he have timed it perfectly? Did he retire like Michael Jordon after sinking the jump shot in the dying seconds to win the series?

I think the biggest risk in the market is the belief that this negatively correlated relationship between stocks and bonds offer the last “free arbitrage.” Nothing is for free. And when everyone has “figured something out,” it’s time to look the other way.

What percentage of modern portfolios are precariously perched upon this relationship continuing? Risk parity, robo advisors, factor investing… All of these strategies rely on backtesting what has worked in the recent past. And nothing has worked better than long stocks souped up with a levered wallop of sovereign bonds.

Throughout history, crashes always occur in areas where, as Mark Twain says, “what you know for sure just ain’t so.” Housing on a nationwide level will never go down. Dotcom stocks represent a new paradigm. Portfolio insurance offers a free method to be long stocks. It’s always the same. There is always some belief that is simply false. And the really difficult part? When you are in the midst of the bubble, it’s damn near impossible to tell. After all, the underlying premise for the causes of these crashes often begins in logic, but is taken to a point where it defies common sense. Housing declines on a nationwide level should have been a low probability event, until you gave everyone crazy liar loans based on this outcome never happening. Dotcom stocks did represent a once in a lifetime profound opportunity, but at crazy prices, it was impossible for investors to capitalize on this change. Portfolio insurance might have helped insulate equity accounts in 1987, except when everyone adopted the same strategy, it ensured its own demise.

Owning bonds as a diversifier against equity assets makes sense, until Central Banks drive rates to absurd levels, monetize their balance sheet through the purchase of any financial asset that isn’t nailed down, and whole industries are created to take advantage of the supposed “free arbitrage” of owning fixed income against risk assets.

Buying sovereign bonds against your risk asset portfolio will not only fail to save you in the next market crisis, but will instead be the source of the crash.

This belief that fixed income will continue to offer superior risk-adjusted returns and that the negative correlation versus risk assets will stay constant is the what we know for sure that just ain’t so of this market cycle.

This morning I saw Josh Brown poking fun at all the doomsdayers who have been predicting an economic collapse and a return of a 2008 style credit crash. 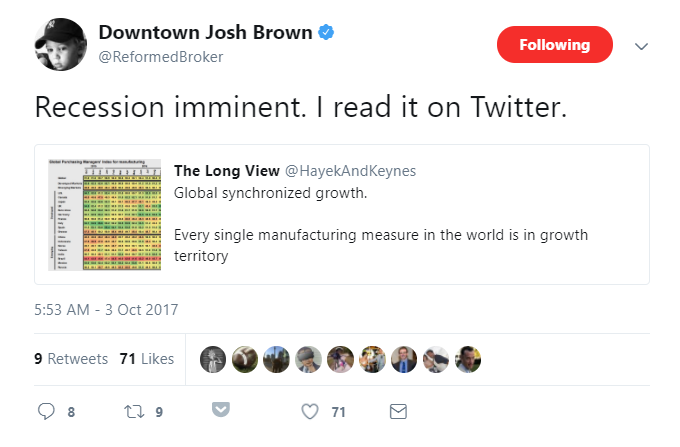 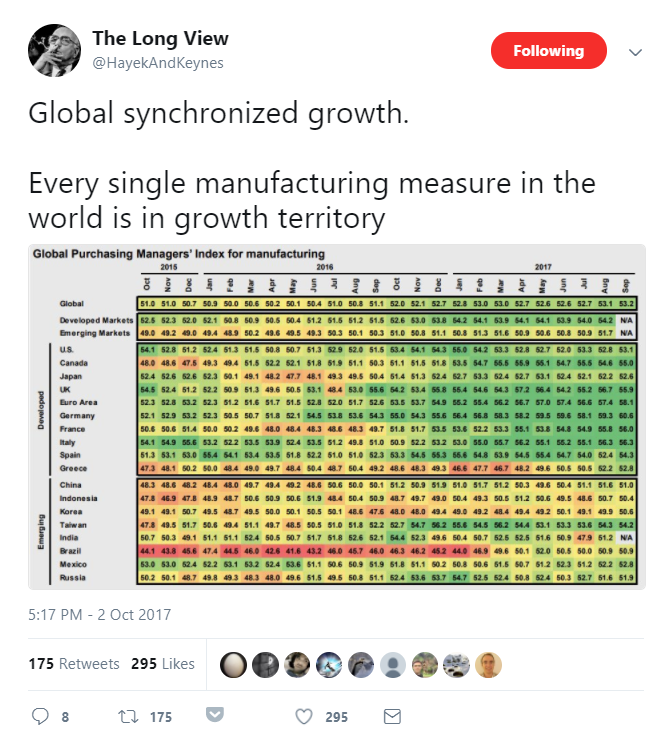 A couple of things. First of all, I know all too well the moment you start ribbing someone about a call, the Market Gods have a way of making you look especially foolish. Lord knows I have experienced their fury first hand often times enough to know. But more importantly, since when are stock market returns necessarily related to the economy?

Stocks have ground higher during one of the most feeble economic growth periods we have experienced since World War Two. I would argue the price of stocks have had little to do with economic performance and more to do with Central Bank policies.

I wonder how many of the “stocks for the long haul” stock market bulls have thought through what economic strength will mean for asset prices. Sure they will point to previous cycles and say rising economic growth was good for stocks. But the global financial system has permanently changed. Quantitative easing, negative interest rates, Central Banks with balance sheets that are 40%, 50% even 95% of GDP. If anyone claims they know how this will unwind, or that they know everything will be fine, then ignore them. This is one of the craziest monetary science experiments ever concocted.

Economic strength will force all of this Central Bank buying to stop. Inflation could actually cause Central Banks to raise rates. Think about that for a second. Imagine a Central Bank that instead of expanding their balance sheet is forced to shrink it. What will stocks look like when the Swiss National Bank is selling every day instead of buying? Now you might say that will never happen. But ask yourself how many others are buying equities or bonds because this will never happen?

What everyone knows “for sure” will be wrong. And nothing seems more at risk than the near universal idea that owning bonds is a great trade. I am not worried about a repeat of a 2008 style deflationary collapse. I am worried about Central Banks getting the inflation they have so long longed for. And contrary to what the equity bulls believe, it will not be good for stocks. And the final kick in the ass will be that the bonds that everyone thinks will save them, will end up being the anchor around their neck. 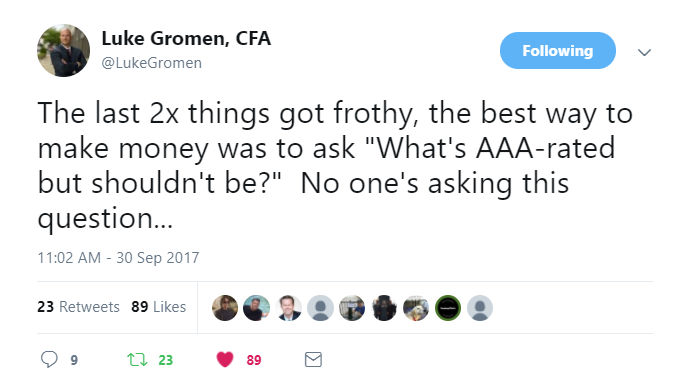 At the beginning of this post, I told you I would lay my theory about the cause of the next great market dislocation. There you have it. Sovereign bonds, instead of being a great saviour, will instead be the cause. I know that flies in the face of almost all prevailing wisdom. Most market pundits will tell you the opposite. Well, at the risk of being impertinent, aren’t they making my case for me?

Before I leave you, I mentioned I was writing this article to Sam Gruen from Lightfield Capital, and he shared with me a piece he wrote about the same topic. Here’s a take from a guy a lot smarter than me, with a little bit more meat on the bone of the argument – “What am I really paying for?” A question from Johnny Utah and a bedtime story.

And I can think of no better ending than Sam’s graph of the correlation between stocks and yields over the past fifty years. 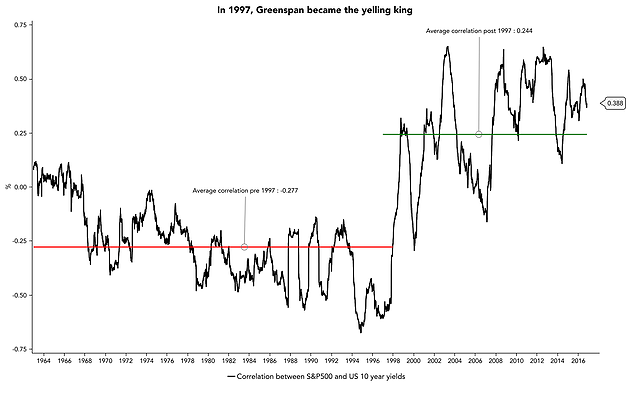 I think Twain would be proud of Sam and I. Then again, Twain was also famous for saying, “the more I learn about people, the more I like my dog.” Me too, Mark. Me too… 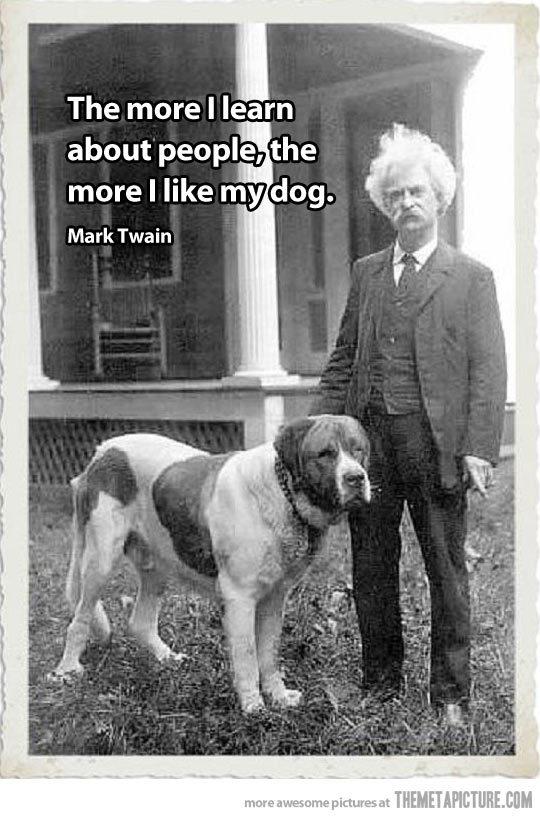