We have previously noted the massive market cap inflation and then stupendous collapse of the Delirious Dozen of 2000.

Together they represented a classic blow-off top in the context of a central bank corrupted stock market. When the bubble neared its asymptote in early 2000, the $3.8 trillion of market cap represented by these 12 names was capturing most of the oxygen left in the casino. That is, the buying frenzy had narrowed to a smaller and smaller group of momo names.

That severe concentration pattern was starkly evident during the 40 months between Greenspan's December 1996 "irrational exuberance" speech and April 2000 (when he told the Senate no bubble was detectable). In that interval, the group's combined market cap soared from $600 billion to $3.8 trillion.

That represented, in turn, a virtually impossible 75% per annum growth rate for what were already mega-cap stocks. As it happened, in fact, $2.7 trillion or 71% of the group's bubble peak market cap vanished during the next two years.

What we didn't mention yesterday, however, is that this bubble top intumescence never really came back. In fact, the market cap of the eight surviving companies—all of which have continued to grow—-today stands at just $1.3 trillion or 34% of the 17-years ago peak.

Needless to say, that's because the market no longer affords the Delirious Dozen of 2000 valuation multiples that are even remotely in the same bubblicious zip code.

Thus, the eight survivors posted combined net income of $52.3 billion during the LTM period ending in September 2017. On the far side of the 1999-2000 tech bubble, therefore, current earnings turn out to be worth 25X—not the 75X recorded back then.

We revisit the rise and fall of these turn of the century high flyers because we believe the same process of market narrowing into a diminishing number of momo names is exactly what is happening again as we reach the asymptote of this latest and greatest central bank fueled bubble.

In fact, we have identified a new roster for the Delirious Dozen of 2017 – and have tracked their course over the last 40 months. During that interval, of course, Janet Yellen did not even bother to muse in public about "irrational exuberance" like Greenspan did.

That's undoubtedly because Fed orthodoxy now holds there just plain aren't any bubbles—apart from isolated segments like commercial real estate. To the contrary, the 12 geniuses on the FOMC have purportedly vanquished the business cycle entirely, thereby insuring an economic nirvana of perpetual full employment, world without end.

Not surprisingly, their combined market cap has soared from $1.7 trillion to $4.0 trillion during the last 40 months in a pattern which is highly reminiscent of the last go round. And for our money, that $2.3 trillion gain represents the same kind of bottled air.

Thus, Amazon is now valued at $550 billion and thereby trades at 293X its $1.9 billion of LTM net income. But all of that net income is attributable to its rent-a-cloud service (AWS) which is arguably worth $100 billion on a standalone basis.

That is to say, the great Bezos E-commerce juggernaut is implicitly valued at $450 billion, yet has not generated a dime of profit from the scorched earth its has left behind in retail land. That's what we call bottled air.

Likewise, Broadcom trades at 246X net income and Netflix is valued at 194X. These companies may well be the equal of Cisco and Intel as innovators and value generators with a long life of growth ahead.

But both are challenged by ferocious competitors, and have no more chance of sustaining their current absurd valuation multiples than did Cisco (200X then, 19X now) or Intel (60X then, 16X now).

Next consider Salesforce (CRM), which is currently valued at $77 billion, and Tesla, which sports a market cap of $54 billion. Yet both had large net losses during the latest 12 months. In fact, during the last five years, CRM has posted cumulative net losses of $650 million and Tesla has lost $3.3 billion.

Even if these two do manage to avoid the fate of Nortel and Global Crossing, the red ink stained charts below suggests that earning into their combined market cap of $131 billion will take more than a few miracles. 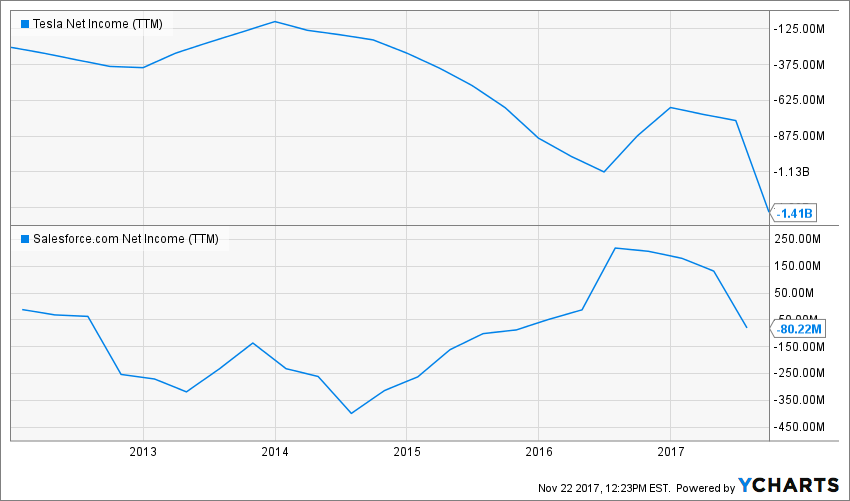 Even Alibaba at 55X, NVIDIA at 50X, and Goggle and Facebook each at 35X are essentially defying math and the business cycle.

The latter two companies, in fact, may be the greatest thing since sliced bread, but they are also virtually 100% dependent upon advertising revenue. During the last recession, global ad spending plunged by nearly 9%, as shown below, and by more than 14% in the US alone.

Moreover, the digital capture of market share—of which is 85% is attributable to FB and GOOG—-has nearly run its course. Accordingly, no company in a cyclical 3-4% growth industry can sustain a 35X PE multiple for any appreciable period of time.

Much the same can be said for Home Depot (HD), which is currently flying high, but is not capable of permanently sustaining a 25X PE multiple. In fact, its recent results have been flattered owing to the capture of significant market share from the collapse of Sears and due to elevated sales from a standard home improvement spending cycle that is now reaching its peak. Additionally, it has not yet been attacked head-on by Amazon (but that's surely coming).

But like much else at the current bubble top in the casino, Home Depot's elevated short-run gains have been confused for permanent growth capacity. However, the verdict on that is crystal clear: During the 11 years since the 2006 housing peak, HD's net income has grown from $6.1 billion to just $8.6 billion in the October 2017 LTM period.

That computes to a 3.2% per annum growth rate, and Home Depot's best years are surely behind it. After all, the tsunami of baby boom retires are emptying their nests, not renovating them.

At the same time, America's soon to be shrinking work force will face ever higher taxes to pay for the upkeep of the former, thereby sharply constraining the discretionary income of the overwhelming share of working households. Man caves and granite kitchen counter-tops are not likely to survive the generational squeeze looming ahead.

Accordingly, we believe that HD's days as a 25X PE stock are numbered.

In short, among the Delirious Dozen for 2017, only Apple has a reasonable multiple at 19X. But then again, Apple has been cycling along the flat line for more than three years at its towering sales level of $230 billion and $50 billion of net income.

Yet even today's casino recognizes that given Apple's monumental size, it is virtually impossible to move the growth needle; and that even one delayed or botched product cycle could cause its $50 billion of net income to take a not inconsiderable plunge. 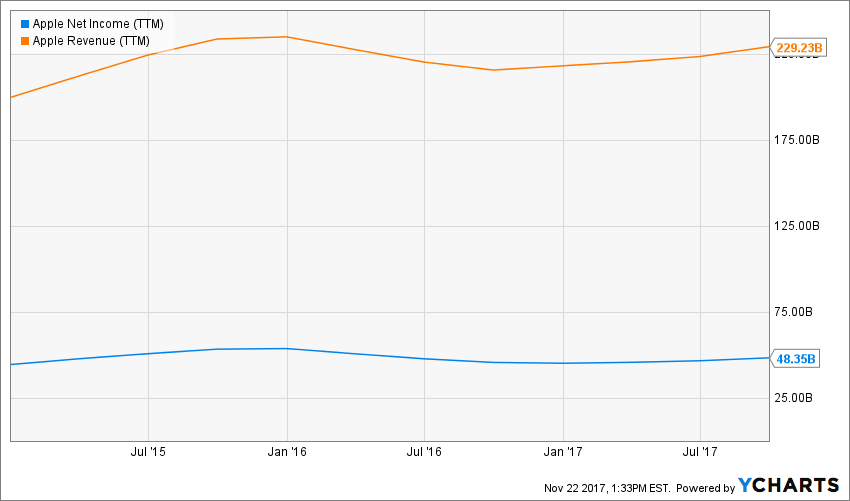 During the 40 months since then, the group's market cap has nearly tripled to $3.2 trillion, while its net income has climbed to $65 billion. Consequently, the group's PE multiple has now soared to 49X or to nearly the nosebleed level that pertained among the previous group of high flyers back in April 2000.

Needless to say, the business cycle has not been abolished and this expansion is now 101 months old. In fact, the chart below suggests it may be reaching its "sell-by" date.

But here's the thing. The bottled air resident among the Delirious Dozen of 2017 is where all the top of the bubble mania has again gotten concentrated.

So when the Black Swan, Orange Swan or Red Swan, as the case may be, finally arrives and they begin to sell AMZN, FB, TSLA or CRM—-look out below.