What Happens to the $200 TRILLION Bond Bubble When Rates Normalize? 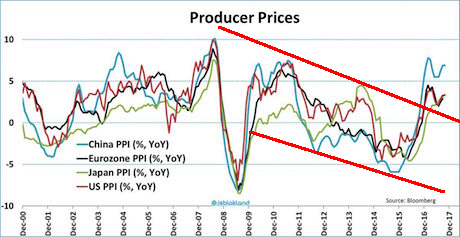 I believe 2018 will be the year inflation arrives.

The reason, as I’ve noted throughout mid-2017, is that multiple Central Banks, particularly the European Central Bank (ECB), Bank of Japan (BoJ) and Swiss National Bank (SNB) have maintained emergency levels of QE and money printing, despite the fact that globally the economy is performing relatively well.

All told, in 2017 alone, these Central Banks will printed over a $1.5 trillion in new money and funneled it into the financial system. This is an all-time record, representing even more money printing than what took place in 2008 when the whole world was in the grips of the worst crisis in 80 years!

And it has finally unleashed the much sought after inflation. Around the world, inflationary data are breaking out to the upside. Producer prices are soaring in the EU, Japan, China and the US.

The post What Happens to the $200 TRILLION Bond Bubble When Rates Normalize? appeared first on Silver For The People.

This article was posted in bank, ecb, inflation and tagged Uncategorized. Bookmark the permalink. Follow comments with the RSS feed for this post.Comments are closed, but you can leave a trackback: Trackback URL.