Females Are Outperforming Males On Every Educational Level, And That Has Staggering Implications For The Future Of Our Society It is an uncomfortable truth that most educators simply do not want to talk about. Females are dramatically outperforming males on every educational level, and many are wondering what this means for our future. If men do not feel a strong sense of purpose and meaning, they can get into trouble really quickly. As I write this article, the vast majority of those that abuse drugs are men, the vast majority of those that commit violent crimes are men, and the vast majority of those that we put into prison are men. I began researching this article by looking into the fact that the labor participation rate for men has been declining for decades, but our problems run much deeper than that. Today, so many men feel lost. Millions of them don’t have a sense of direction, millions of them don’t have anything that really drives or motivates them, and millions of them are deeply depressed and greatly dissatisfied with life.

For a lot of them, it started very early. As Dr. Michael Thompson told CBS News, all across America girls are outperforming boys at every educational level…

“Girls outperform boys in elementary school, middle school, high school, and college, and graduate school,” says Dr. Michael Thompson, a school psychologist who writes about the academic problems of boys in his book, “Raising Cain.” He says that after decades of special attention, girls are soaring, while boys are stagnating.

Perhaps one of the big reasons why young males are so drawn to sports is because it allows them to do the sorts of things the come naturally to males. Sporting events allow young males to engage in battle, to hunt and to conquer. Yes, it is a simulated environment, but sporting events really do bring out something primal in young boys.

We all have natural tendencies, and it appears that modern forms of schooling are doing a much better job of connecting with females. In fact, one extremely large study found that girls all over the world are substantially outperforming boys in the classroom…

According to a recent study from University of New Brunswick in Canada, girls have been outperforming boys consistently through the years. It is a popular belief that boys perform better in subjects like Math and Science; however, a review of 308 studies involving more than 1.1 million children across the globe has challenged this stereotype. The study looked at data from 1914 to 2011 and the findings suggest that girls do better in school than boys in the classroom regardless of the material.

So it isn’t just in the United States that this is happening.

And it is a trend that does not seem to diminish with age.

Young women are dominating in high schools all over the nation, and at one high school in Massachusetts girls make up 70 to 80 percent of the students in advanced placement classes…

At graduation ceremonies last June at Hanover High School in Massachusetts, it was the ninth year in a row that a girl was on the podium as school valedictorian. Girls also took home nearly all the honors, including the science prize, says principal Peter Badalament.

“[Girls] tend to dominate the landscape academically right now,” he says, even in math and science.

The school’s advanced placement classes, which admit only the most qualified students, are often 70 percent to 80 percent girls. This includes calculus. And in AP biology, there was not a single boy.

I suppose the silver lining for young men is that if they really want to meet more girls they should just work really, really hard to get into those AP classes.

But the truth is that this is no joking matter. At this point, higher education in the United States is totally dominated by women. Just check out these numbers…

Women earned approximately 57 percent of the bachelor’s degrees awarded by U.S. institutions of higher education in the 2016-2017 academic year, according to data released this week by the National Center for Education Statistics, which is part of the U.S. Department of Education.

That, according to NCES data, makes 2016-2017 the eighteenth straight academic year in which women have earned approximately 57 percent of the bachelor’s degrees awarded by U.S. colleges and universities.

Did you understand what that excerpt was saying?

Women have received about 57 percent of all bachelor’s degrees in this country for 18 years in a row.

Our future doctors, lawyers, politicians and societal leaders come from our pool of college graduates, and the numbers tell us that women are going to be dominating those fields for the foreseeable future.

So what will men be doing?

Well, in recent years more of them have been dropping out of the labor force than ever before. The following comes from the New York Times…

Among women, the share out of the labor force has fallen from 66 percent in 1950 to 43 percent today. That is not surprising in light of changing social norms and the greater career opportunities now open to women.

Men, however, exhibit the opposite long-term trend. In 1950, 14 percent of men were out of the labor force. Today, that figure stands at 31 percent.

For those of you that prefer graphics, here is a chart from the Federal Reserve that shows this staggering decline over the last several decades. Please note that we are currently at a much lower level than we were at during the last major recession… 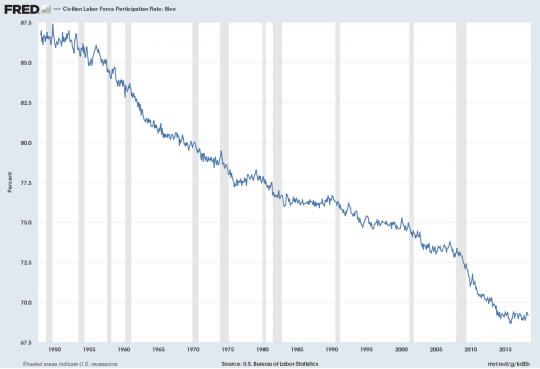 If men aren’t working, how are they supporting themselves?

For many, the social safety net provided by the government is an easy answer. Here is more from the New York Times…

One might wonder how these less educated, prime-age men support themselves after leaving the labor force. The social safety net plays a role. In a study for the Mercatus Center of George Mason University, Scott Winship reports that “75 percent of inactive prime-age men are in a household that received some form of government transfer payment.” Mr. Winship believes that government disability benefits in particular are one reason for the lack of interest in work.

For others, living with Mom and Dad for as long as possible is the solution. Today, a staggering 38.4 percent of all Millennials live with their parents, and that number seems to keep going up with each passing year.

We live during an era of dramatic societal change, and many are concerned about where all of this change is taking us.