Watch Out California! 53 Major Earthquakes (Including A Magnitude 8.2) Just Hit The Ring Of Fire In A 24 Hour Period 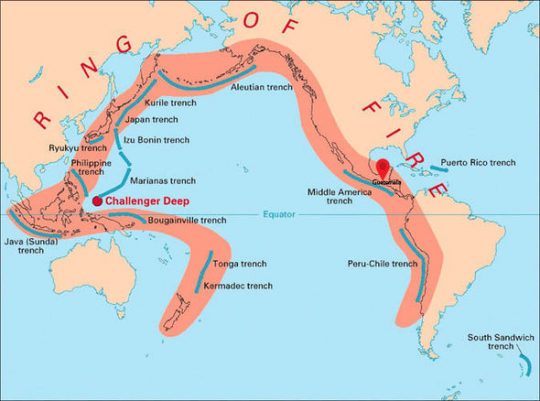 Is something unusual starting to happen to the crust of our planet?  The USGS defines any earthquake of at least magnitude 4.5 as “significant”, and there were 53 earthquakes that met that criteria along the Ring of Fire on Sunday alone.  If you would like to verify that information for yourself, you can so do right here.  Not too long ago, I wrote about how “Earth changes” seem to be accelerating all over the world, but even I was stunned by the ferocity of the seismic activity that we witnessed over the weekend.  Because none of the earthquakes happened in the United States, the mainstream media almost entirely ignored this story, but that is a huge mistake.  The entire west coast of the U.S. falls along the “Ring of Fire”, and experts assure us that it is only a matter of time before the seismic tension that is building up along the tectonic plates in that area is released.

Much of the seismic activity on Sunday was near the small island nation of Fiji, and it is true that Fiji often experiences earthquakes because it sits directly inside the Ring of Fire…

The ring is formed of a string of 452 volcanoes and sites of seismic activity (earthquakes), which encircle the Pacific Ocean.

Roughly 90 percent of all earthquakes occur along the Ring of Fire, and 75 percent of the world’s active volcanoes are dotted along the expansive ring.

It certainly is not unusual to see earthquakes happen along the Ring of Fire, but what was unusual about the activity on Sunday was the size of the earthquakes.

The largest quake on Sunday was a massive magnitude 8.2 earthquake that could have done an enormous amount of damage if it had been closer to the surface…

A massive quake of magnitude 8.2 struck in the Pacific Ocean close to Fiji and Tonga on Sunday but it was so deep that it did not cause any damage, authorities in Fiji said.

The U.S. Tsunami Warning Center also said the quake was too deep to cause a tsunami.

The USGS calls these “deep focus” earthquakes, and while some of the biggest earthquakes to strike the earth are deep focus, their depth usually minimises damage.

The biggest deep focus earthquake ever recorded was in 2013 when an M8.3 struck near Russia and was felt all over Asia, giving us a sense of how massive this Fiji quake was.

In addition to this massive earthquake in Fiji, other areas of the south Pacific were also hammered on Sunday as well.

You may remember that the Indonesian island of Lombok was shaken by a tremendous quake back on August 5th which killed hundreds of people, and on Sunday they were hit once again.  The following comes from CNN…

A trio of intense earthquakes shook several islands in the South Pacific and Indonesia on Sunday, including two on the already battered island of Lombok.

The most recent major quake was a 6.9 magnitude tremor centered just 4 kilometers south of Belanting, on the Indonesian island of Lombok.

That island is still trying to recover from the devastating effects of an August 5 earthquake that killed more than 430 people.

But until big earthquakes start happening here, many Americans simply will not pay any attention to all of this.  What they need to understand is that this is truly a global phenomenon that we are witnessing, and shaking in one part of the globe can have tremendous implications for people literally living on the other side of the planet.  In particular, those living along the west coast should be deeply alarmed that seismic activity along other areas of the Ring of Fire appears to be intensifying.

And I am definitely not the only one saying this.  According to one British news source, scientists are warning that “increased seismic activity” along the Ring of Fire “may mean the so-called ‘Big One’ killer earthquake is on the way”…

Scientists warn increased seismic activity in the area may mean the so-called “Big One” killer earthquake is on the way.

If California was hit, experts warn tens of thousands could be killed.

Sadly, the truth is that we would be extremely fortunate to only have “tens of thousands” killed in the event of a historic earthquake on the west coast.

The 1906 and 1989 earthquakes were actually not that big compared to some of the monster quakes that we have seen elsewhere along the Ring of Fire, but they still did tremendous amounts of damage…

Two major earthquakes have hit the Bay Area in modern history. In 1906, a 7.9 magnitude earthquake hit San Francisco and 80 percent of the city’s buildings fell or burnt to the ground, leaving 300,000 people homeless and killing nearly 3,000. In 1989, a 6.9 magnitude quake caused the ground to liquefy in parts of the city and collapsed highways, killing more than 60 people.

A new report from the U.S. Geological Survey says that there is more than a 70 percent chance that a 6.7 magnitude or higher earthquake will hit the area in the next 30 years.

We live at a time when our planet is becoming increasingly unstable.  In recent weeks we have witnessed earthquake swarms off of the Oregon coast, record-setting heatwaves, hail the size of softballs, and wildfires of unprecedented size and scope.

There are some experts out there that would like to assure all of us that what we are witnessing is completely normal.

But I think that not a lot of people are buying that explanation.

Because there has not been a major seismic event on the west coast for decades, many people have grown complacent.  They simply assume that because nothing has happened in such a long time that nothing will happen for the foreseeable future.

Unfortunately, the experts assure us that the “Big One” is definitely coming to the west coast at some point, and all of this seismic activity may be an indication that it is coming sooner rather than later.

The post Watch Out California! 53 Major Earthquakes (Including A Magnitude 8.2) Just Hit The Ring Of Fire In A 24 Hour Period appeared first on The Economic Collapse.