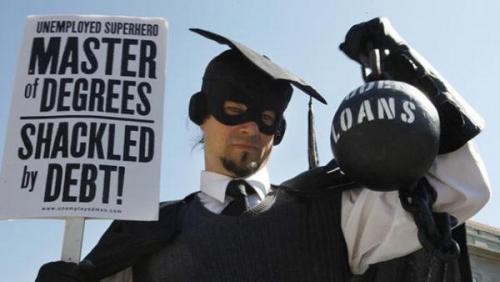 Higher education has become one of the biggest money-making scams in America.  We tell all of our young people that if they want to have a bright future, they must go to college.  This message is relentlessly pounded into their heads for their first 18 years, and so by the time high school graduation rolls around for many of them it would be unthinkable to do anything else.  And instead of doing a cost/benefit analysis on various schools, we tell our young people to go to the best college that they can possibly get into and to not worry about what it will cost.  We assure them that a great job will be there after they graduate and that great job will allow them to easily pay off any student loans that they have accumulated.  Of course most college graduates don’t end up getting great jobs, but many of them do end up being financially crippled for decades by student loan debt.

Let me repeat that again.

Since 2007, the total amount of student loan debt in America has nearly tripled.

But of course the quality of college education has not tripled over that time.  Instead, it has progressively gotten worse.  At this point most college courses have been so “dumbed down” that the family pet could pass them.  If you would like to look into this more, you can find a list of 37 of the most idiotic college courses in America right here.

These days, most college courses do not require any actual writing.  Instead, your performance is judged by a series of “tests” consisting of multiple choice, fill in the blank, and true/false questions.  And the questions are usually ridiculously easy, because most of our high school graduates need to take remedial courses in basic skills when they get to college.

I spent eight years at public universities, and the quality of education that I received was a joke, and that was many years ago.  Now the quality of education has deteriorated so dramatically that most college degrees are essentially worthless from a practical standpoint, but for many professions you still need that “piece of paper” in order to “qualify” for certain jobs.

So the scam continues, and thousands upon thousands of “administrators”, “diversity specialists”, “career counselors” and “college presidents” are taking home massively bloated salaries at our expense.  Beautiful new lecture halls, residential complexes and sports stadiums are going up at colleges and universities all over the country, and textbook publishers are laughing all the way to the bank.

If everything but the basics was stripped away, the cost of actually delivering a college education to students would be quite low.  In fact, most learning could be done over the Internet.

But instead, the “college education industry” has convinced all of us that we desperately need their services, and that we shouldn’t care about the price.

Of course many of our young people are filled with regret once they get out into the real world and they realize that student loan debt is going to financially cripple them for the rest of their lives.

#3 Over the previous ten years, student loan debt has grown by a staggering 176 percent.

#4 Americans now owe more on their student loans than they do on their credit cards.

#7 30 percent of all student loans in the United States are either in “deferment” or “forbearance”.  The most common reason a loan is placed into one of those categories is because the borrower cannot pay.

#8 It is being projected that a whopping 40 percent all student loan borrowers will default on their loans by 2023.

#11 Each year, more than a million Americans default on their student loans.

The post 11 Rage-Inducing Facts About America’s Wildly Out Of Control Student Loan Debt Bubble appeared first on The Economic Collapse.